Worldly. That adjective seems to fit Lighthouse #3 (Autumn 2013) best; the short stories, essays and poems contained within are fit-to-burst with cultural content from foreign lands. We begin close to home – the USA/UK – then travel to warmer climates – Spain, Guayaquil – and emerge in The Hague, then we take a holiday in Paris before ending up where we started; back in the UK. Yet even the UK/USA is rendered exotic, for example: in ‘After Bathsheba’ Omar Sabbagh explores the City of London through Yusuf’s own experience of the city. For the reader, London is then experienced through Yusuf’s spiritual, cultural and philosophical ramblings which give light to the multicultural communities living in and around Kensington High Street. 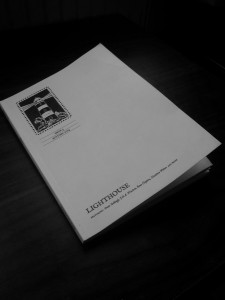 But before I delve into the content I thought it would be nice to ruminate about the quality of the publication first. The covers are modern, minimal and very presentable. The binding is tight and the pages are of high quality. The text is printed clearly, the serif font adds to the literary nature of the magazine, and overall the publication has been very well edited (I certainly couldn’t spot any errors). Also, the plastic-y nature of the covers ensures that any tea spillages that occur during reading will not damage the outside of your copy – of which I am particularly thankful.

The magazine opens with a thought-provoking essay by Philip Langeskov, Laura Elliott and Angus Sinclair in which they reflect on the act of collaboration: using Rilke’s exchange of letters with his wife, Clara (whilst she was away travelling in Egypt) as a foundation, the authors muse on the collaborative activity between the author and the world around her, between the author and the language in which they are writing, or even between author and reader. This introductory essay serves as an interesting opener to Lighthouse; acting as a kind of whetstone on which the reader can sharpen their reading prior to the prose and poetry that follows.

Sex, lists and footnotes are a good summarisation of J. D. Winslow’s short story, ‘Hot Date with Cute Girl’. Opening with the hard hitting ‘I’m watching a kids’ sci-fi program with my dick in a peanut butter jar’, Winslow refuses to pull punches. As the narrative worms it way through the events that occur pre-dick damage we grow accustomed to the extremely confident, anal, and arguably narcissistic narrator, whose capitalisation of ‘Serious’ and ‘Committed’, insertion of untranslated Polish, bold use of lists and copious footnotes combine to form a style that dances between the intellectual, experimental and hipster/bohemianism. ‘Hot Date with a Cute Girl’ is rich in style but light in plot – though perhaps this is the point. If Winslow was seeking to represent the life of Millennial metrosexuals then he’s been remarkably successful; as the flat finale mirrors the shallowness of the self-centred narrator – though it leaves a sour taste in the mouth.

‘After Bathsheba’ by Omar Sabbagh is, as previously mentioned, an exploration of London through Yusuf’s spiritual, cultural and philosophical ramblings. When not in conversation or at dinner, Yusuf reflects extensively about those close to him – his mother, his family, and Lara (the love interest) – and has a similarly self-centred tone as the previous text: he is articulate, at points ‘princely’ or ‘gallant’, even ‘mercurial’. The language of the text is similarly eloquent, touches on the poetic, and again feels like the voice of a distinctly upper middle-class multicultural urbanite. Yusuf is culturally, spiritually and academically seasoned revealed quickly within the first paragraph in the unsubtle namedropping of ‘Plato’ and ‘Saint Augustine’ who, in the fourth, reflects on a painting as ‘between empathic representation and schizoid abstraction’. Unfortunately, though I appreciated Yusuf’s story and his multicultural encounters, I found the prose alienating, patronising, and potentially unnaturally constructed. Yusuf appeared as a kind of twisted ideal, and the prose was too charged with references and poetic flourishes – slowing the narrative to a crawl.

Lastly, Michael Sforza’s, ‘Paris’, is a more approachable text that concentrates on a couple and their trip to Paris. Lacking the pretension of the previous text, ‘Paris’ has more in common with the minimal prose style and shows us the interactions between characters rather than suffocating the reader with style. Each small interaction, shift in intonation and repetition bleeds significance; exposing character traits and offering an insight into their everyday lives. I enjoyed Sforza’s piece more than the other two as he grasped a finer balance between style and substance.

Edwin Kelly’s ‘Variation on a Transcript of a Blackbird’ is another rhythm-orientated poem describing a schizophrenic interaction with (you guessed it) a blackbird. The lines tweet and titter; contents dark and mysterious, themes darting from line to line like the feather head twitching. Rosie Sandler’s ‘Eyes Squeezed Shut’, appearing later in the ‘zine, is tonally and structurally similar – employing short lines in free verse with an emphasis on sound and shape to tell the story of how a monster is ‘eating our neighbour from the inside’. Lines like;

And even
that blemish, raised

like a knoll in the
field of your back

bone crumbs like
biscuit on its lips;
snuffling as it seeks

‘Voice in Dots’ by Flo Reynolds, ‘Seedlings from the Address Book’ by Jo Surzyn and ‘That Crowded Elevator’ by Charlotte Gann can be similarly grouped as three poems that tremble on the edge of experimentation – Flo Reynolds’ piece being the most playful. By playing with the layout of the text, Reynolds assembles and defines groups of images within it, patterns are isolated and images defined by their placement whilst disjointed lines float around the text like poetic accompaniments. Charlotte Gann’s ‘That Crowded Elevator’ also explores the page but puts a stronger emphasis on definition, inserting dictionary definition of terms and phonetic spellings to dissect the language used within the poem to create a kind of ‘metapoem’. And finally, Surzyn takes a calmer approach in ‘Seedlings From Address Book’ – a meditation on the pages and places contained within, Surzyn uses tabbed text to separate and isolate locations and images.

Featuring additional poems from Ned Denny (powerfully spiritual), Leo Hunt (vicious, personal, emotional and political), Sarojini Lewis (I found unfortunately rather patronising and again, rich with self-importance). J. Adamthwaite’s and Kate Venables short prose, Elizabeth Reeder’s ‘Two Lyrical Essays’ and a final pseudo-essay from Matthew Welton, Lighthouse (3, Autumn) is packed full of punchy poems and confident prose with a good smattering of experimental structures within. My only criticism? There’s a very strong upper-middle class sentiment running throughout; characters and narrators that are well dressed, well travelled, not wanting for much and incredibly sure of themselves. This is mainly true of the prose pieces – the poetry tends to be more meditative and thought-provoking with less name dropping and academic stuffiness, but otherwise the volume is very readable!