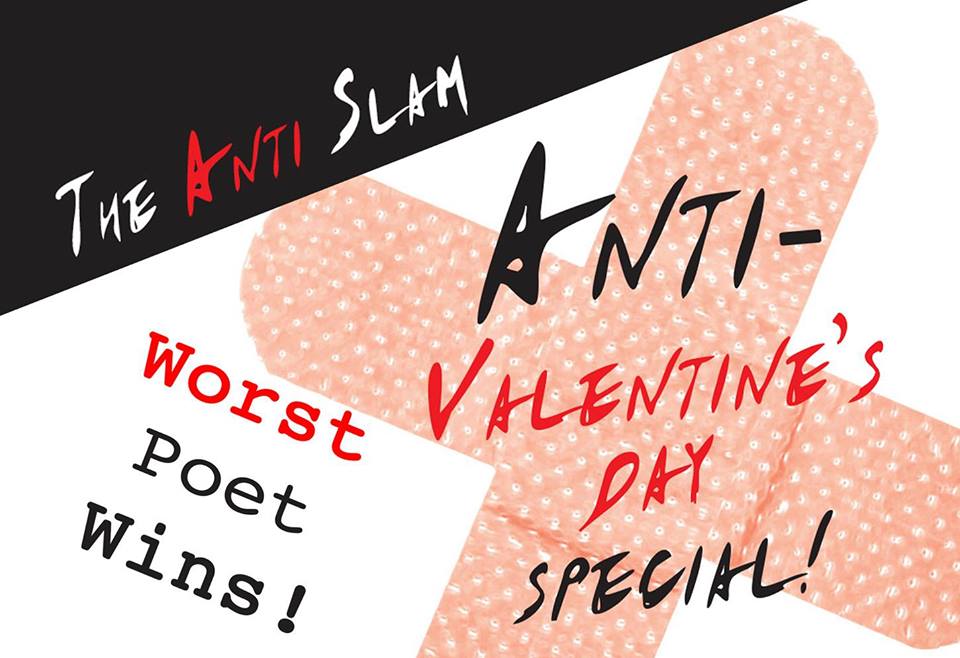 So began a special Valentine’s Day edition of the Anti-Slam – a night of competitive failure, featuring love poetry so awful, and performed so terribly, it mutates into a thing of hilarious and enjoyable genius. Or that was the idea. Read all about whether it worked!

The venue: The Hackney Attic was packed for this smorgasbord of schadenfreude. It’s a lovely venue, which works well for this kind of event – large enough to fit a healthy crowd, but small enough to feel intimate, fostering a great convivial atmosphere and making audience participation feel like a friendly communal endeavour.

The hosts: Paula Varjack and Dan Simpson have a great rapport and on-stage chemistry and a natural feel for what’s funny and how to engage the crowd.

How it all worked: An Anti-Slam has all the trappings of a regular slam competition – points awarded for each performance, a panel of judges, a scoreboard, a final round and a slam champion.

In this case, all of this was a delightful sham designed to make the audience laugh.

Poets competed to get the lowest points possible, the judges adopted comical personas to play off each other, and the audience was actively encouraged to laugh, mock, conspire or otherwise influence proceedings.

If the awfulness of the poetry reached a depth the entire audience couldn’t handle, we were instructed to yell, “We Need to Talk!” in unison, to end the performance (it only happened a couple of times, most notably when one of the poets was edging towards a Holocaust joke).

The judges: Amy McAllister as Mary, Pete the Temp as Peter the Temporary and James McKay – were brilliant fun, comically misunderstanding the poetry (e.g. finding subliminal references to Foucault in a poem about “chicken vagina”), and awarding points with shameless and absurd prejudice. This made for a lively, irreverent atmosphere with a lot to laugh at.

Now, about the poetry.

A lot of thought has to go into performing bad poetry well, from your words to the way you say them, to what you wear and how you behave on-stage. For these performances to work they had to the most hilarious variety of bad possible, and the poets on this bill rose to the challenge with gusto.

Our hosts got us in the mood with a gloriously terrible tag-team performance of Kristen Stewart’s now infamous My Heart Is a Wiffle Ball/Freedom Pole. While we can argue over whether the original is as terrible as its reputation, Varjack and Simpson took it to another level of bad. They delighted in interrupting each other, intoning the words as melodramatically as possible, sharply changing tone and emphasising pointless line breaks to reach a new nadir of pretentious, incoherent and ridiculous. Utterly wonderful.

Tina Sederholm performed as the comically pompous ‘The Honourable Ribena Piddlebrick’, affecting a high voice and haughty demeanour to intone ghastly lines like “this is a found piece … I found it in my mound”, while stopping every few minutes to’ helpfully’ explain her metaphors and subject matter. A good balance of irritating and hilarious.

Richard Purnell came in disguise as ‘Theophilus Lovegod the Fornicator III’, a side-splittingly slimy and deluded lecher with a variety of pseudonyms including ‘The Pussy Explorer’ (which, the second time he was introduced, became the infinitely more disturbing ‘The Pussy Exploder’). The Pussy Exploder had come “all the way from Atlanta, Georgia” to grace us with poetry that was as artlessly sex-obsessed as a lamppost-humping terrier, which made me laugh more than anything else that night.

Richard Tyrone Jones read from a comically large Valentine’s card an ex had sent him. He couldn’t remember why he had broken up with her.

“Roses are red…” he read, “the Chinese are inscrutable…” …ah. “Violets are violets / I’m single and you are suitable.” This went on for some time, onwards to “roses are red / wetbacks are Mexican / I ache for your penis / when can we have sex again?” While the contrast between the increasingly disturbing racism and the escalating fervour of the advances was funny, the piece didn’t really work for me, feeling like a one-note joke that went on too long.

Vera Chok stormed on stage in a cloud of teenage emo bolshiness, glowering at the audience and spitting out painfully pretentious and melodramatic rhymes about vampires and heartbreak. I particularly enjoyed her accompanist – a nameless companion in a bowler hat who stood impassively behind Vera with a cello, occasionally chiming in with a mournfully atonal bow to offset the poetry at random moments and who ignited an argument (in French) as they left the stage.

The perfectly captured immaturity and unfiltered teen emotion, the oblivious redundancy of the cellist, the embarrassing unprofessionalism of the off-stage antics all cooked up a perfect storm of dreadful.

Alan Wolfson entertained us with some so-bad-it’s-good wordplay (“life is well mingin’ … love is overwhelmingin”), but the sexism in his poetry didn’t quite get the balance right of being absurd enough to be satirical and funny.

Charles Adrian is a professional actor, and this really came through in his outstanding portrayal of Ms Samantha Mann, an awkward and nervous rookie performer. The relentlessly earnest Samantha introduced each poem with a spate of self-conscious rambling, endlessly interrupting herself with self-deprecating asides.

Watching her was so, so entertaining, not least because she was so recognisable as an open mic archetype. I’ve seen that poet – awkward, apologetic, disorganised, self-deprecating – in fact I’m pretty sure I’ve been that poet. With such a tour de force of acting it almost wouldn’t have mattered what the poetry was like, but it turned out to be just the right level of painfully mediocre. “I am nobody’s wife… and nor do I want to be … just yet (I was brought up on second wave feminism)”. The sight of Mann agonising over expressing such banal and clumsy words was both endearing and hilarious.

Adrian’s considerable effort was well rewarded – Samantha was the most popular poet of the night by a mile, and eventually won (‘lost’) the slam by a huge margin of raucous audience enthusiasm (whoops, spoilers).

The four contenders for the win were the poets who had received the fewest points from the judges – Charles Adrian/Ms Samantha Mann, Richard Purnell/Theophilus Lovegod, Vera Chok and Fanny Walker. The lucky four were tasked with crafting an entirely new poem during the interval, using three prompts from the audience; an object (cheese grater), a place (Leamington Spa) and a person (Gandhi).

Though I particularly enjoyed Lovegod’s nonsensically revolting foray into propositioning Gandhi for sex, wanting to spread the seed of his “divine ballbags” “like candy, like peace”, the crowd overwhelmingly cheered for another stunning performance by Charles Adrian as Ms Samantha Mann. Ms Mann regaled us with more delightful interruptions, awkwardness, self-deprecation, and this:

“If I cast my mind back to Leamington Spa… in it drifts a garlic crusher that I decided not to buy.”

A deserving winner in a night of excellent performances.

To sum-up: the Anti-Slam Anti-Valentine’s Special was a brilliant time.

There was a lot of hard work and skill on display, entire characters lovingly crafted with quirks, foibles and unique mannerisms. Poets played around with costumes, performance styles, and the different emotions and impulses that can fuel bad poetry and performance, from anger, nervousness, sadness and arrogance, to petulance, hostility and bizarre, unchecked lust.

I loved that the humour gave us both horrid characters to laugh at and familiar performer-archetypes we could recognise ourselves in, as well as just general silliness and absurdity.

There were many more performers than I was able to mention who turned these things into an artform, and a few others, just as talented, who didn’t quite manage to stay on the right side of funny-bad and bad-bad. It’s deceptively tough to find that balance, and the fact that most of the poetry worked wonderfully is a testament to the ability and effort that went into this night.

Above all, everybody – the hosts, judges, and performers – seemed to love being a part of it. Their enthusiasm was infectious, the audience was entertained, and a great deal of fun was had by all.