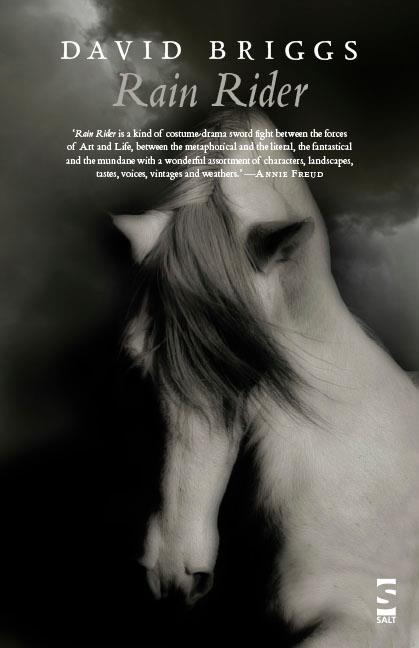 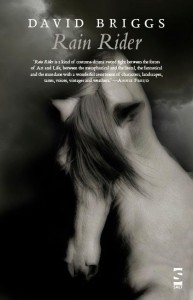 David Briggs won an Eric Gregory Award in 2002, and his first collection, The Method Men (Salt, 2010), was shortlisted for the London Festival New Poetry Award.  His second collection, Rain Rider, continues to pursue a wide range of interests and influences, from Renaissance art to latent cannibalism, undercutting highbrow inclinations with a wry tongue. This style could leave you a bit cold on first reading; whatever drives the poem, what is intimate or urgent, can at times, seem buried beneath the text.  But as I go back for lines to evidence this, I can’t find them.  On second and third read, these poems transform, revealing their own vulnerability, and are the more engaging for having been shy.

On rereading, “Temperance” creates a visual riddle, but it also has depth that’s obscured by the caricatured image of its subjects: “He sips a glass of water, / nibbles caraway seeds, // in monogrammed pyjamas, / in his conservatory cane-chair”.  There are “two sons”, where the exaggeration works to define their roles as opposing types: “one boy’s quiffed among / brandyflame and courtesans […] the other’s hunched by upturned // flatcap and chalk pastel / on a squally kerbstone”.  The perplexity of these opposites is played out through a million-piece jigsaw “of Escher’s Relativity”.  It could have been little more than a well-crafted idea; but the quiet, eternal puzzlement of the “he” (only implicitly the father), cuts through his facelessness, creating a sense of melancholy that builds empathy between the reader and the page.

“Temperance”, when read alongside other titles in the book, such as “The Devil”, “The Hermit” and “The Fool’s Quest”, invokes the Major Arcana.  In Tarot, Temperance symbolizes the fusion of opposites, and is also associated with the 15th letter of the Hebrew alphabet, Samekh, written as “O”.  The echoes in this book are too precise; it’s unlikely the inclusion of a poem called “O” is coincidental.  The poem is sub-headed, “after Jeux de peau, by Serge Lutens”, as though it were referring to a poem, rather than perfume: her scent “detonates / in your brain, and the film behind / your eyes begins its soft-ticking spool”.  This movement from the opening lines in a bookshop, “Flicking through the foxed leaves / of a slim first edition”, to the film, “grainy, 60s celluloid wherein you / are padding barefoot across the marble / floortiles of a Petersburg apartment”, is an unravelling, finely controlled, until we return to the bookshop, “to look up from the last line / of a poem neat as a Russian doll”.  Again, characters remain faceless, but the poem is intense, offering vicariousness in its second-person perspective: “to reveal it was you, all along […] that he was directing you”.

The perfume in “O” echoes “The Enigma of the Fool”: “We called the men of letters, / who debated his motive in perfumed couplets”.  The fool is a recurring character, and along with “The Devil”, who “likes to appear unannounced when I’m writing”, occupies a space of self-reflexive irony for the writer and/or the written.  “The Fool’s Wake”, the final poem, opens:

Scatter me, my children,
along that invisible littoral
between the world of the play

and the world of the audience;
for I was outlaw from, and dual citizen of,
both those neighbouring states.

And in “The Fool Subject to Experiments”, “When the poet took the top off his skull, / the Fool rummaged in his own / pink-wet brainsack, / yanked out a pantomime horse”.  These cards are mocking, clownish in that unnerving way clowns have.  Poets have turned to the Major Arcana before, but Briggs has re-imagined these ancient figures into our contemporary landscape:

He tried to warn the star-thwarted lovers,
offered to set up their Twitter accounts;
but, they were two spent faces
of the same tarnished nickel
stuck in the slot of a rockabilly Wurlitzer.

The book is balanced with other poems ostensibly more direct that give the collection a sense of the personal.  These poems add to the whole, but although they’re immediately moving, they sometimes bare too much.  In “No Prisoners”, a boy’s fury, when his father’s sandcastle of Wells Cathedral is ruined by “one whelp”, is urgently felt, but also mediated by reason:

they know themselves to be incapable.
And they grow, and thrive, of course,

insufficiently chastened:
thousands of them; one or two I’ve known.

When the Revolution comes, I’ll have them
buried to their chins in the sand,

expunged slowly from the horizon
by a merciless, incoming tide.

It’s not the overreaction of the speaker’s plan for revenge, but the explanation in the preceding lines that intrudes on the poem, flattening the experience of that final image.

Briggs’s images are surprising, bright, and often generate much of the energy in a poem.  In “La Perochonniére”, the opening images drive (through) the narrative with instant and evocative clarity:

Perhaps you’ll turn off the road
of peach-melba-coloured newbuilds,
down the single-track lane,

by her orange espadrilles
plops beneath duckweed.
Maybe there’s a flotilla

of cootlings, a heron, a muskrat

The equivocations of “perhaps” and “maybe” don’t take away from the sureness of the image, but seem to offer the reader some say in the matter.  The second-person narrative comes up a handful of times throughout Rain Rider, along with the imperative, but I don’t think it’s only this that makes us feel tangled in these poems.  In the same way a refrain draws the listener into a song, the echoes, the repetition of keywords, returning themes, characters and motifs, implicate the reader in Briggs’s lines.