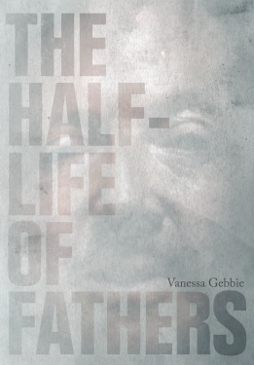 Vanessa Gebbie’s debut collection, The Half –Life of Fathers, is a smooth, polished production that treats the evolution of a family history. The poems are crafted with a great deal of skill; there are no edges that threaten to cut you, every line ends on an interesting word, and even the most (potentially) horrific of the war poems are so distanced from the source that they are rendered pretty.

Gebbie chooses very picturesque subjects; child-miners, soldiers, a maid carrying a pan brimming with human piss. She inserts enough detail into the poems to hint at larger narratives, but she has the unfortunate tendency to draw back into the safety of the expected cliché rather than pushing her readers into more difficult territory. In the poem ‘Robert Mills Architectural Antiques, Bristol’ Gebbie describes the interior of an antiques shop used by professional decorators to furnish the houses of the rich. She writes:

We were never meant to be
as close to heaven
as this.

Gebbie is an acclaimed novelist and it shows in her choice of subject and nose for narrative. However, it is a challenge to fit dialogue into a poem and while most of her attempts are successful, there are a few slips that are difficult to ignore. ‘The language of the chartered surveyor’ is a poignant piece about the mental deterioration of the poet’s dying father. Gebbie assumes his voice as he finds himself resorting to architectural language to describe his disease:

‘Here, the beam that runs
through me is weakening. It
hurts like the Devil.’

The benefit of quotes like this in the context of a poem is that the reader really gets a sense of what the man was like. The problem is that, oftentimes, people speak in cliché. The trick is in the editing. ‘The beam that runs through me’ is a beautiful phrase, evocative. ‘It hurts like the Devil’ detracts from it. Had she edited more carefully, she might have remained true to the intent of the speaker and brought both his individuality and the high emotional content of the circumstances into sharper relief.

‘The Piss Pot’ is, without question, the strongest poem in the book. It describes ‘Nan’ (presumably the poet’s grandmother) carrying a brimming bowl of human urine delicately down the stairs to dispose of in the outhouse. Through an almost alchemical transformation, the most foul becomes, in this poem, the symbol for the most precious bonds a human being can have:

Nan holds the piss-pot level,
carries family waste down the narrow stair,
holds it, Magi-like, not to spill a drop.

The family is mingled together in a close space, but they are not peaceful, ‘each person’s water / fighting the other’, and the poet is somehow jostled from the group:

the pot tip, the piss spill, disunite
in the light from the single bulb, my water

fall away from the rest, land apart…

The love of a family, the physical properties of piss, are not enough to prevent the poet from achieving the isolation required to work. She will always have a skewed perspective, a slight distance.