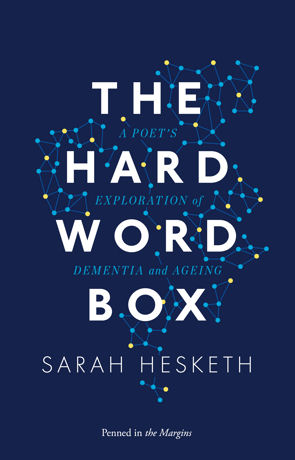 The first thing you notice about Sarah Hesketh’s The Hard Word Box is the title. Is this a box for hard words, or is it a hard box for words. Are words like grandmother’s eggs both hard and fragile, do we need to worry about the hard box and what might happen to those words inside? Are the hard words in the box? Should we open this box? What will emerge, what stays behind?

Ambiguity, displacement, repetition, fragmentation are hallmarks of the language in this book, and of the language of dementia patients.  In 2013 Sarah Hesketh spent nearly half a year as an artist in residence in a care home for Alzheimer’s patients as part of the Where the Heart is project. The Hard Word Box springs from this experience.

As Hesketh says in her introduction “Here are some of the people I met. Here are some of the things we said. Sometimes there isn’t anything else.” Hesketh brings the reader an experience of immersion into the language, the stories and the silence of people living with dementia. This book fills the world of the care home with quiet meaning through gentle listening.

The Hard Word Box should be considered and enjoyed as a whole, a tapestry woven out of language, threads of interviews with inhabitants, threads of poems, found poems, even silence. We meet Ron, George, Peggy, Maureen, Angela. Some patients are sweet, some frisky, funny, angry, flirtatious, incoherent, wise, banal, some speak a lot, repeat themselves, some no longer speak at all. In the context of the whole one of the most moving pieces is ‘Elizabeth’ which consists mostly of the absence of words.

The collection starts with a found poem listing a patient’s belongings on admission. In the language of the care home the people living there are called service users. Immediately breaks appear between the outside and inside worlds, named and unnamed things, reflecting the struggle to create meaning and order through language.

One of my favorite pieces in the book is a found poem entitled ‘Peggy’ which lets Peggy emerge through her own words, as she was and as she is now. The poem creates a feeling of contentment with only the slightest strains of distress:

My name is Margaret, but I prefer to be called Peggy.
I have lots of memories that make me smile, but I can’t choose a favorite one at this moment.
I feel happy when I am surrounded by my family.
I enjoy going to my son Graham’s house and sitting in his garden under the big tree.
I don’t like being on my own as I like a lot of company.
I feel upset when my family has visited and left to return.
I like to put my make-up on every day and have my hair done at the hairdresser’s weekly.

The poem ends with Peggy’s efforts to bring order to her world: ‘I enjoy tidying around, putting things in cupboards.’

In the center of the book is ‘Ron’:

Ron’s sister is very important to him.
Ron likes to be dresses smartly at all times, with a hankie in his pocket.
Ron likes people to talk to him quietly and slowly so he can understand them.
Ron enjoys both tea and coffee with sugar and has a good appetite.
People must be patient with Ron.
[…]
Meeting his sister was Ron’s most special occasion.
[…]
All Ron wants for the future is to be comfortable, well fed and warm.
[…]
Ron has no mobility and requires a hoist for all transfers.
Ron would like to stay as healthy as possible.

An affecting portrait of Ron develops through the words said about him, details about his physical condition integrating into other things we think we know about Ron. The fact that he is completely immobile is just one more thing about Ron, creating simultaneously a shocking contrast and a strange harmony in all the things we hear about him. This is what language can do, opening up the invisible inner life alongside that which can be seen.

The next piece is a longer interview with Marlene, who was caring for an Alzheimer’s patient. The piece is gentle with the information, which develops organically. We gradually learn how long Marlene has been caring for the patient, how they are related. The piece is an odd sort of page-turner and I shall not give away too much detail here. It is not often one feels the need for a spoiler alert in reviewing poetry.

The poems are musical and accessible. Gentleness is the word that most describes this book for me. Some of the poems are devastating, some are funny, such as ‘Phyllis’ Instructions for Sex’:

All women really need
is a thing they can
pull out sometimes,
and then fold away quietly
when they’re done.

You might enjoy the ruins
of our grammar, the way we
chew up our nouns to song.
It’s not your hand that’s getting
thinner on the blanket.
Please don’t ask us to speak
the hard words all at once.