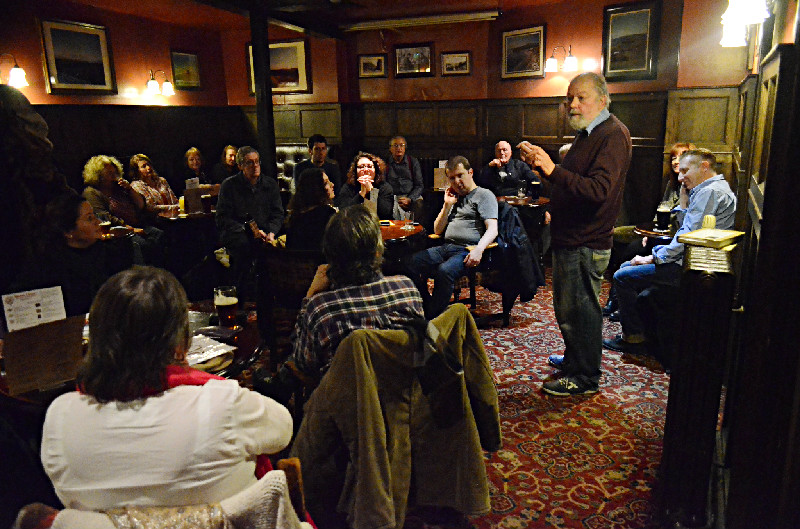 Hosted by Alan Roderick, this ‘Open Mic Spoken Word Extravaganza’ takes place in the cosy confines of Ye Olde Murenger House in the heart of Newport, with all proceeds from the admission fees going towards the fundraising campaign set up in order to re-open the former Stow Hill Library. It promises to be a fantastic evening with appearances from award winning crime novelist Belinda Bauer, winner of the 2014 Costa Poetry Prize Jonathan Edwards and a number of other talented poets resulting in a colourful array of poetry well worth braving a wet and windy January night for.

Alan Roderick kicks off proceedings with an extract from his tongue in cheek detective story which really captures the landscape and language of Wales, seamlessly weaving Welsh and English in phrases such as “Thank Cymru” (the Welsh for Wales) and “Hello cariad” (a term of endearment deriving from the Welsh word “caru” – to love). There were more than a few knowing chuckles when the typical Welsh weather was alluded to, eloquently summarised in the final line “Hey Ho, it raineth every day”.

The next reader is Belinda Bauer who hastens to point out that although her plots are crime-based, her books are really just about people.The first two readings are from her novels ‘Darkside’ and ‘Rubberneck’, and these short extracts hint at the deeper depths the full works delve into. A strong theme of anonymity and loneliness threads its way through the scenes, and a scenario that, on the surface, might appear humorous is undercut with a strong sense of sadness. Things take a darker turn as Belinda shares a murder scene from ‘The Facts of Life and Death’ in which a girl is suffocated in sand. While the death itself is a little fantastical, the thoughts that flash through Steffi’s mind in her final moments have an authentic ring of truth due to the cohesion of the mundane with the horrific, and it makes for gripping listening.

Whilst Belinda’s characters may not be wholly believable as real people, they have a particular charm in their fictionality, and their emotions and situations certainly hit hard as these scenarios do convey a very recognisable portrayal of life in general. If these extracts are anything to go by, then, it is well worth heading out to purchase Bauer’s entire collection.

The next reading is by Julie Pritchard, a passionate performer whose poems are full of strong visuals and raw emotion. However, the sparsity of the introductions meant they flashed by and left me feeling I hadn’t quite been able to enjoy them to their full potential. Founder of an open mic night called Rhyme and Real Ale, this lack of accompanying dialogue was shared by some, although not all, of the other readers. Frances Smith brought the chilly winter air swirling in with her beautifully descriptive poems ‘Cold’ and ‘About Alps’, Bridget Leggy Tanner contrasted a very dark piece titled ‘Demons’ with a hilariously accurate poem simply named ‘The Work’s Christmas Do’, and Patrick Widdess read a number of surrealist poems, my favourite of which was a marvellously creative one about the selling of excuses.

In contrast to these imaginative works, some poets focused on hard-hitting social issues. Des Mannay’s ‘And the Dead Shall Rise’ expressed his disgust at a fracking company in Wrexham purchasing the site of a mine disaster still classed as an official gravesite , whilst ‘Would that I have died that night’ was inspired by a letter he had read on the issue of assisted suicide. These were poems which made a statement, and his last words – “Beware as prejudice becomes dressed as rights” – left the audience with much to consider. Both of Bernard Pearson’s poems were also extremely relevant to the current climate: his first, which was written in the aftermath of the Charlie Hebdo shootings in Paris, explored the essence of words; whilst his rather more political ‘Ye Merry Olde England’ condemned the racism, elitism and sexism which are still rife in today’s culture, but with an extremely engaging black humour.

However, there was plenty of light to combat the dark as Gregory Platt embarked on a hilarious poem lamenting the woes of losing brollies. With a marvellous reading voice and fantastic rhymes, this was a poem of pure silliness that had everybody smiling within seconds. Alan Roderick’s ‘The Newport Blues’ garnered quite possibly the loudest applause of the night – a marathon of a poem crammed with almost every place you could think of within a 10 mile radius, this was a truly patriotic ode to a much loved, often overlooked city. Matthew Plumb, then, remarked on the similarities he had found between Newport city and Pittsburgh, before sharing two poems dedicated to the latter place and the strong ethics it holds.

Amongst such wonderful poetry, it’s a tribute to Jonathan Edward’s sublime work that he emerged as my highlight of the night. His first poem ‘The Voice in which my Mother Read to Me’ was a simple concept but translated into such a deep and meaningful poem which transported me straight back to my childhood. Of course, as Jonathan remarked, the trouble about writing about your mother is that sooner or later you have to write about your father so the next rather humorous poem ‘How to Renovate a Morris Minor’ was dedicated to him, followed by a touching piece ‘Building my Grandfather’ in which Jonathan’s relative, who died before he was born, arrives as a flat-pack which he has to build – a brilliant way of expressing the process of imagining a person you never knew.

From family the poet shifts to place with two poems written whilst gazing out of windows, the first in a Newport café and the second in his own street, Colliery Row. Both are extremely honest in their observations but with that unique twist of humour and surrealism which makes Edwards’ poetry so engaging. My personal favourite was simply entitled ‘Flamingos’ – a beautiful poem for the ears as well as the imagination, with a gorgeous weaving of words ending in the fantastic line ‘Fuck that, you say, let’s all be fabulous”.

And on this night of spectacular poetry, I think that we were.