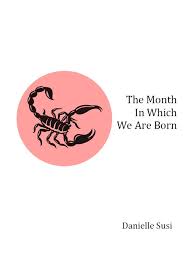 Danielle Susi’s 12-poem chapbook, The Month In Which We Are Born, pays careful attention to the physical and immaterial trails we leave behind – “footprints and fingerprint fossils left in dust.” There’s an echoing concern throughout the poems – will we be recognized in the traces we’ve left, if they’re altered?

The first poem, “Ode to Absorption,” opens with this question:

What happens in wreckage when teeth
have been so changed
from original dental records
via orthodontia or otherwise?

From there, The Month In Which We Are Born unfurls into a deep, paced read – of empathetic engagement with the reader, and a keen understanding of the human lifecycle, that we’re always moving toward becoming something “other” than the bodies we were born in: “When we say/ this bowl is red we mean/ it is not itself.”

The chapbook’s epigraph from poet Bianca Stone reads like a powerful protectant: “Which is why we live—and why we send out/ balloons into the atmosphere/ with notes tied to them that say/ Nothing bad can touch this life/ I haven’t already imagined.” What follows is the poet’s wise, wry view of this life, a series of “x-ray[s]/ held against illumination” held against that “Perpetual motion of memory.”

There are myriad ways of seeing, as in “Pareidolia,” where the narrator recognizes celebrities like Morgan Freeman and Fiona Apple, and family members in the faces of strangers on the train (“Today on the train,/ a woman looked at me/ as if she had raised me”) or in the deft title poem in couplets, “The Month In Which We Are Born”:

we would stare at beamed ceilings

for hours, discovering the fish, the faces, the tiny sail-less boats.
We’d go to bed dreaming of the ways lines worked to trick our eyes

and in the morning, find images in our bowls of cereal.

In this poem and in others, like “Housesitting” and “Heat,” there’s also a sense of an endless summer, a too-hot late July and August that also forces the reader to look laser-like into her past and future through shimmering heat that’s rising off pavement: “Because heat has a way of making you remember things that haven’t happened yet.”

Susi doesn’t allow her audience to get too comfortable in these poems, which by turns stun with beautiful, surprising imagery (“Inside this room,/ wax torsos linger on shelves”) and then “pull us down to the lake’s thick bottom” for urgent moments of self-confrontation, many of which feel elegiac, as in “Housesitting”: “Of all the summer honey harvested// only one small jar of many remained/ pure and unstained by the errant wings/ of bees.”

The voice in this collection is one that leads the reader through a radiant-toned landscape of introspections that radiate joy, to contemplations about our short time on this earth and what we’re really leaving behind. In addition, the musicality of poem after poem is a delight for the reader: alliteration and repetition (“summer honey harvested”), assonance (“Blue dress chewed”) and internal and end rhyme (“a cold apple on the grass lifting/ up to expose it to the mouth of a horse”).

The poems come in many forms: traditional left-column poems like “Housesitting” and “Drowning”; short prose poems like “Heat” and “Depravity”; and those that play with spacing and indentation, like “Pink Child” and “Blueprint,” which contains these lines:

Take the plastic curlers from your hair
and walk swiftly down Somerville Avenue,
around the corner to Wellington.

At the end is the O’Keefe home,
or their old home,
with a dog and a swimming pool

I don’t remember the shape of.

In these lines and in this small collection, Susi injects a sense of urgency, carpe diem even. The reader will understand why being fully present in this short life is given as an imperative throughout, as in the pithy prose poem, “Bitter”: “There is nothing more important than putting your fingers in your mouth/ after picking a dandelion.// A child’s obligation to wrap her tongue around the bitterness of pollen.”

Yes, please taste the bitter and the sweet in these poems. Yes, “we should let the hook take us,” we who each day are growing older, who both seize the day and then must give in.