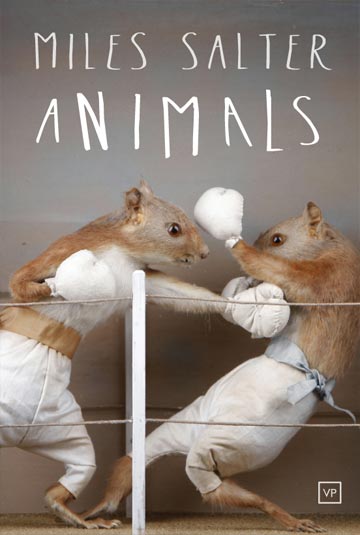 I missed out on Miles Salter’s first collection, The Border (2011, written as Miles Cain), also published by Valley Press (an independent publishing house based in Scarborough, who appear to be doing sterling service), so I came to his second collection not knowing what to expect. The cover illustration, depicting two squirrels in boxing gear laying into one another, is promising: there’s something absurdly funny about this imitation of human aggression.

It soon becomes apparent that Animals covers a wide variety of sins, and I use the word ‘sins’ advisedly because Salter evokes a biblical tone from the outset, kicking off with ‘Two by Two’, in which Noah fails to keep order. In this monologue, the narrator rises above the situation, observing

A good vantage point for the poet to watch the anarchy below.

There are, as might be expected, further monologues in the voices of animals. In ‘Confession’, a wild beast, seemingly a lion, seeks forgiveness; elsewhere a domestic cat gives an account of itself. There are mini-fables – ‘The Python Who Slept With A Woman’, and the brilliantly funny ‘Giraffe’, with its opening gambit

Giraffe walks into a bar and says
“Is this some kind of joke?…

What are you, animals?

This is a world in which people are true to their animal instincts. ‘Exposure’ is a monologue by the perpetrator of some unspecified crime, who is publicly humiliated; there is also the very memorable (and how I wish it wasn’t) ‘Jimmy Saville Speaks’, which captures the voice and surface chit-chat of that particular wild animal.

As the quoted lines indicate, the language is not complicated. Initially, I found two drawbacks: some poems give the nod to their sources of inspiration – Julian Barnes, Bible passages, a Picasso painting – and my own knowledge was sometimes found wanting, leaving me mystified until, on a second reading, I reached for Google. Secondly, as I am biased towards lyric poetry, I had to turn off my inner “hearing aid”. This is dramatic poetry, peopled with characters who communicate clearly and are not much interested in the interplay of rhyme, assonance and so on. Some pieces are laid out as prose.

Once I had grown accustomed to this style and decided to go the distance, the poetic images produced were startling, and the many voices of Animals started to reverberate. There is a major scene shift into poems of social and political comment towards the end of the collection, with poems such as ‘The Big Society’, ‘Hack’, and ‘Drone Talking’. There is also wistfulness, a sense that things could have been different:

Imagine glass repairing itself
deleting injuries from bricks or boots…

and ‘Futures’, with its prophetic hope that ‘a day is coming… when…

Strangers will
open car doors in rain, say “Hop in,”
without causing alarm.

Clustered towards the end of the book are bleak, futuristic poems; in ‘World Without End’, the speaker harks back to the old days crammed with the acquisition of material goods, reflecting on how things have changed, whilst in ‘A Warning’, the narrator comes to the realisation that the anti-social creatures ‘threatening our hedges and extensions …resembled our kids.’

This counter-punches rather pleasingly with the final poem, ‘Ten Reasons Why This World Must End Soon’: an enumerated list, from the quirky, to the hilarious, to the chillingly serious, ending the collection with a knockout. Follow that, as they say.