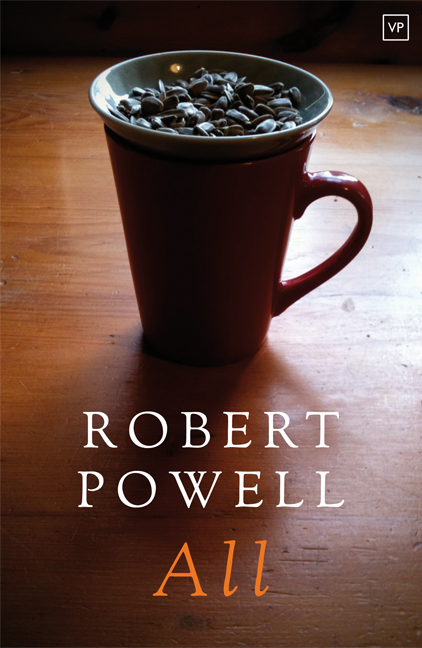 ALL moves the reader to acknowledge that no one and nothing is ordinary. With a wistful, inventive and insightful eye for the particular, Robert Powell’s collection takes us to the place in feeling where this living business is infused.

The book is divided into three sections: ‘The Strange Places’, ‘The Rivers Unfenced’, ‘All’. In each section there are many inventive, insightful lines and images whose movement is propelled by the music of the phonemes and consonant clusters that enrich Powell’s writing.

‘Snapshot’ is rich in such lines –

its dreaming cast across the frost-seized field

Let the sun warm your back,
feel it slip through your hair like lover’s fingers
and melt the pressed frost in your footprints

The music is also subtle: how ‘chilled air’ connects with the ‘threadbare dressing gown’ several lines later in ‘Owls in Dusk’. There are also rich moments in a poem like “Tuscan dusk’ (‘How Poetry Can Be Useful-II’), “skin moon” and “owl-echo” in ‘Moonlit Walk’, and

[‘Insomnia in the Garden Cabin’]

Amongst all these admirable lines there are extraordinary moments:

Waters rush
there are surfaces,
and things under surfaces –
beneath the map, the other map:

[‘At A Yorkshire Wedding in London’]

‘The Strange Places’ begins with the moving ‘The Poet Knocked’: a review, a dream, a commemoration, yet it is not time-bound, even though this looking back has the risk

as if something more could have been, the image of him in “a small tense shape / of sad, fierce hunger / at the locked red door”:

I didn’t answer,
sat still and waited.
The heron and the summer flew
and only now do I know what I knew.

Strange what dreams and memory conjure. Incidents from the past evoke detailed responses and are resonant in the present. The remembrance of a lovers’ meeting evokes failed attempts at punctuality (‘The Wakening’) and – a pervading theme throughout – the transforming light which both illuminates and casts the shadows of the past (e.g. ‘Light Passing Across an Ancient City’):

It’s the light, he said
If we look inside
we’re very worried
that the image we’ve never seen
might disappear.

The transience of this moment adds a wistful and lyrical quality to such remembrances. In ‘Her Name, Remember’ as well as the accumulation of particulars there are rich lines:

The rhythmic propulsion of the ‘w’ is reinforced by the speed the ‘i’ provides and the longer ‘o’, finding the way into the one-stress ‘wind’ and slowing down what that ’tedious’ brings.

There is “long voyaging” in these poems – travels from Cornwall, Paris, Tel Aviv and the Tuareg of Africa – all encompassed in a journey to the Moon in ‘The Rivers Unfenced’. Amid these journeys we pass

the great cathedral
spell-bound in its dumb dictionary
of stone.

So which language
can we use now
of what is given and remains
who we are together
the sky’s cold limits of blue,
and what the world may hold
beyond the world?

[‘Fishing at an unfenced River’]

Somehow or other we find a place that is ours. We may witness brown dwarf news and comet landings at distances almost beyond abstract thought, the existential ‘being-here’ found ‘Lost’:

The Tuareg of Africa
have lost the night sky.
Still, at least they know
something is missing.

There is something of Rosenblum’s Northern Protestant Romantic tradition in Robert Powell. I see a Friedrich painting in ‘Tree in Snow’, and it is welcome. Lyrical and warming, a sense of location is important in his poetry.

So come,
lean with me
into the broad estuary
trunk, close your eyes,
recall the warm house
we could always return to,
feet and hands
aching with cold.

And our luck, to be hungry
only for love.

More than this, throughout the collection there is a looking back to a looking now and here. ‘All’ addresses his companion’s worry as if wounded:

that the leaves would fall from those oak trees
and would be the last leaves (they are falling now);

and they comfort you, these two companions…….

caressing your face
like a mother’s touch,
and telling you,

……and ALL that is is so worthwhile. Another really worthwhile production by Valley Press, from cover to cover.