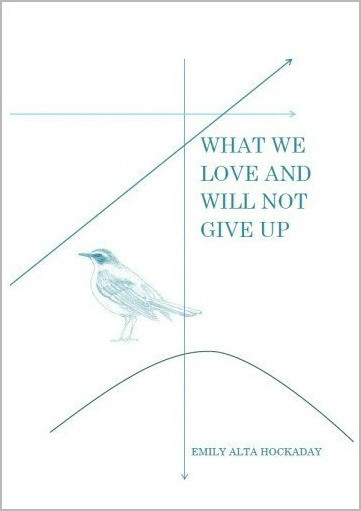 Pamphlets Poetry
May 14, 2015June 19, 2015 Becky Varley-Winter Angelina D'Roza, Dancing Girl Press, Emily Alta Hockaday, Emily Hockaday, What We Love And Will Not Give Up

Have you ever read a poem in which someone’s clearly said not to mention that event/brand/name/trend because it will date the work? Some poems could almost have been written any year in the last century or so; are works more grounded in their time less interesting or relevant for that? Emily Hockaday’s What We Love and Will Not Give Up invites such questions; for example, “Social Networking” references Monolo Blahnik, Sex and the City and the Enterprise floating down the Hudson River. In 100 years, maybe readers won’t connect with this in the same way that I do (then again, neither would my dad). A poem can’t be written for everyone, and a reference that dates it might serve the poem well. This pamphlet engages with contemporary life, its preoccupations and problems. The Gulf oil spill features:

I want to talk about the Gulf of Mexico, how I imagine it:

Globs of oil floating in the now murky water,
visible toxins emanating from the surface like
cartoon squiggles over cartoon coffee cups.

Hockaday moves between what’s going on in the world, the headlines of “the daily whatever”, and the personal: “Am I being melodramatic? […] // Before I know it I have my finger / on your chest and I’m saying / what I don’t want to.” She fights just shy of neat parallels, to offer something more interestingly inconclusive. In “Space Junk”, for example, “Things fly within yards of each other all the time”: valentines to Connecticut don’t arrive, but are returned to sender for insufficient postage. I can’t help but see this relationship in terms of extraterrestrial flotsam. California is “unbelievably resilient: it wants to stay attached”. It seems a disservice to reduce this piece to an extended metaphor or analogy; what I love is the debris, the plain-spoken stuff of it all:

The atmosphere, like the ocean, will eventually eat all the shit
we let get away. The swells of tsunami water peppered with
homes and belongings. People and plastic siding bobbing up
and down. Bicycles and trash lids. It’s going to take a long time
but it’ll go […] And slowly the space junk orbits closer. Will
burn.

Do we gain insight into these almost-valentines’ future, their chances of colliding, of surviving the impact, as “nuclear reactors line up along the shore” in Connecticut? Maybe. But I’m glad of all the elsewhere in the poem, its refusal to settle, to resolve love like the last chord of a song.

Love is the drug driving this pamphlet, sometimes slantwise, sometimes head on. Either way, it’s messy:

You would put me
out in the rain, the lightening, the electric prongs missing the
socket. We have a list of things that make us happy: Much of it
is variable-dependent. Much of it is quiet, much covers waking
in the night fingernails digging into what we love and will not
give up

These shadow puppets are caught in their moment; love is less tangled with the world here than it is in other poems, and this becomes central, the title gathering weight with the question: “How will we name each other if no one gives us the archetypes?” The lovers rip pictures of illustrated moons to hold against each other’s teeth: “Is that what we look like?” They are searching, sleepwalking, with “two terrible white grapes” for eyes. Everything is intensely close.

“Space Junk” uses its prose form to sustain a steady pace, to keep all the pieces – the movement from orbit to ocean, via Connecticut – in play. In “Shadow Puppets” prose freefalls into something confusing, dangerous, happening all at once. This rush contrasts well with the more delicate sequence at the end of the pamphlet, “Our Funniest Home Videos”, which sets up each short poem with the title of a video, such as “A little girl mistakes a radish for an apple”. The poem continues:

I put on lipstick and kiss your face
and jaw

you are sleeping and you
keep sleeping

this will not keep you
loving me

The visual appearance on the page, spare language and fragility is reminiscent of Hockaday’s 2012 pamphlet, Starting a Life, which collects a series of sketches both partial and telling:

She fought for him, too, in other
less obvious ways;
suppressed herself,

let parts of her personality die,
recognized her feelings as love at all.

The poems in Starting a Life all follow the same form as above, but are various in their approach to the relationships, connections – or lack of connections – that spark them, sometimes lovely, sometimes painful. Occasionally a poem is so short and direct that it feels nailed down, but most walk a careful line, and sequencing extends meanings between poems, a cumulative effect building something approaching a narrative arc. These two poems sit opposite each other:

She is unreasonably disappointed
in not knowing the world’s
secrets.

It makes her so angry
she bleeds.

what a mess to clean.

Now,
after having been pregnant,
she notices her body more fully—
the way her nipples expand
different weeks of
the month,

the ache of blood filling the cervix,
turning it blue
[…]

Starting a Life is well worth reading, but in her more recent pamphlet, Hockaday demonstrates her range. Rooted in contemporary life, What We Love and Will Not Give Up makes new its most maddening and enduring subject.