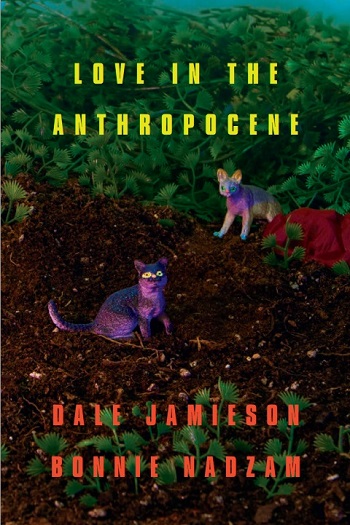 As the introduction to this book explains, the Anthropocene Age is a theoretical close-future era where humans determine all of the aspects of the natural world, from the atmosphere to which species of animals are allowed to exist. Outside of this collection of stories the Anthropocene age has been written about and explored by scientists, anthropologists and other creatives. Love in the Anthropocene sets out to explore both the pros and cons of a world entirely influenced by mass human behaviour. It does this through a series of five short stories and an ending Coda on love. 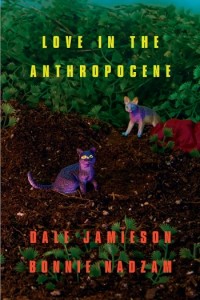 The characters in the stories are made to be wholly recognisable to us. In the first story, ‘Flyfishing’, the relationship between a teenage daughter and her father is entirely tangible: we observe as the father encourages his daughter to take part in countryside, using fishing to teach her about death and where food truly comes from. The twist in the story is that during the Anthropocene Age the countryside is a manufactured affair and that fishing is an expensive activity in a time where most food is also unnatural. By using characters like this, the two authors of the book – Dale Jamieson and Bonnie Nadzam – are able to manipulate the reader’s emotional response to the stories. We have an outside view into the stories which makes the future described seem like a looming and disturbing force.

The stories get ever darker as they go on; yet at the same time they reflect back at us the eternal aspects of human nature. These concepts of love, creativity, and archetypal characters can be seen in literature that stretches back, just as well as these stories which reach forwards. For example similar qualities are ever present in the Gothic literature canon from the Victorian age, which was also written, fearfully, about another dramatic technological change: the Industrial Revolution. The introduction to Love in the Anthropocene reflects the way people from the Victorian age looked forward to our time and found the predicted way of life disturbing. This book tries to do the same thing, in the league of George Orwell’s Nineteen Eighty-Four, it looks to an invasive and unnatural future with a dystopian sweep.

The four quarters of the book look at different aspects of the Anthropocene Age. The titles are fairly self-explanatory, so ‘Flyfishing’ is about exactly that whilst ‘Carbon’ is set on the one-hundredth floor of an office building for a business dedicated to removing and re-using carbon from the atmosphere.

Overall Love in the Anthropocene is an original and highly creative look at the future we are currently creating for ourselves. Instead of exaggerating the stories into tales of a wild dystopia, the two authors use gentle details that affect the reader on a basic emotional level and are perhaps even more disturbing than a disaster novel.