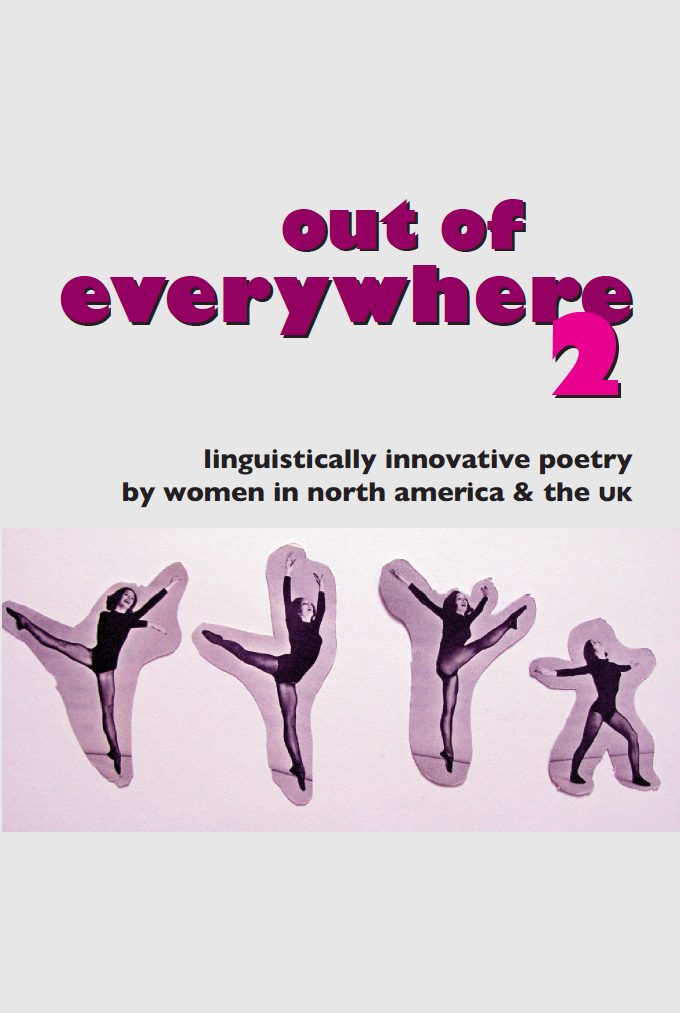 It’s alive. Out of Everywhere 2: Linguistically innovative poetry by women in North America & the UK is an anthology of “formally original, politically and philosophically engaged poetry”. A sequel – twenty years on – to Out of Everywhere, which featured Caroline Bergvall, Fanny Howe, Susan Howe, Bernadette Mayer, Geraldine Monk, Maggie O’Sullivan, Denise Riley, Lisa Robertson, Leslie Scalapino and Catriona Strang, among many others. There is a hint of female canon-formation here, a nascent web in which established poets enable a new generation (I can see Denise Riley’s influence threading through parts of this anthology). This is also a very interdisciplinary crowd – many of the featured poets being performers as well – with a CD available featuring some of the work included. The book opens with a quotation from Eleni Sikelianos’ ‘The California Poem’:

Now: to let go what we knew
to be not tight, but
toney; to find a world, a word
we didn’t know

This is a manifesto for what follows, trying to “find a world” in poetry that’s unfamiliar, full of textured musical sound (“toney” rather than “tight”), and potentially utopian.

Sacha Akhtar describes skyscrapers, highways and cities as if through coloured, distorted film or jelly, like a road movie made by an alien:

She uses the rhythmic, calm delivery of a shipping forecast, syntactically disrupted by line breaks (“elevator // Tunes”), yet visually evocative; minimalistic without being barren. I love a poem called ‘ROCOCO’ purely for this combination of words:

What is an “elf gem”? A fall of rain? Akhtar creates small, immersive poems of extreme close-ups and disorienting beauty. Their titles often relate to their content (‘FAINT’ begins “Sleep, restful / place recharge shh”): they are not entirely detached from sense, but neither are they narratively straightforward. Dreamy, hypnotic, and full of tender textures: “love her skull-river // Flesh, bright.”

Mei-Mei Berssenbrugge’s work is ambitious, impressively fine-grained and lucid. She draws out minute biological processes to describe the formation of a body, striking nuanced balance between seemingly-scientific detachment, poignancy and emotion:

Her hands enlarge.
She can’t see where her sadness ends and someone else’s is.
The line between chemical and emotion is the horizon inside a niche in her
body, transferring non-being to utility.

This feels like peering, closely, into a microscope, at the intertwining of biological matter and consciousness. Andrea Brady’s work also contains an essay-like sequence on motherhood, as if delivering an economic lecture to a baby: “You started out / a creature of trade: you get your best terms, / fight your poverty with greed and violent / sound.”

Amy De’Ath’s poetry is so universally vibrant that it grabs attention by the throat. Her use of rhythm, rhyme and exclamation is so striking that I risk, if anything, disregarding meaning completely, just chomping her lines down for their taste. This is partly because she moves so quickly: in ‘Lower Parallel’, the streaming of water into a washing machine turns rapidly into an online streaming of culture in bed, which then merges into darker content. Her poems aren’t tame, and parts remain semi-cryptic and mystic, using Yoda-like sentence structures. So I’m not sure of my interpretation, but would hazard a guess that ‘Lower Parallel’ expresses a clash of beauty and endless distraction that both disguises and reflects wider violence (whether or not this comes out in the wash). Her writing is full of this push-and-pull between distraction and concentration, consumption and consummation, with a ferocity of feeling that communicates before it is understood: “Here’s a population of rage at you, there is a heaped tenderness consumed”.

She also writes unambiguous joy. The ending of ‘Vertigo Valley’ reminds me of Frank O’Hara’s ‘Having A Coke With You’ (“and the fact that you move so beautifully more or less takes care of Futurism”):

all the wild things wild leaves suddenly make me welcome.
Now I am conducive to everything.
Note today outside of notebooks in the
splayed plumage of our shared brain,
it doesn’t matter even what I’m doing if your head is turning
beautifully to the left is
turning beautifully.

There is too much to say, so many of these poets write startlingly. Eleni Sikelianos offers a funny-sad elegy: “it hurts / when someone drives a boat through your heart, however small, even in dreams”. Holly Pester performs surreal poem-jokes that are also serious. Susan M. Schultz writes ‘Memory Cards’, a series of poems like diary entries, intimate and closely observed. Frances Kruk’s poems feel sharp, angry and funny (“The most Pathetic poem is small people on fire”), populated by dwarves, trapped on lost islands:

Mairéad Byrne uses repetition to great effect, collaging and looping phrases in ‘BAGHDAD’, centred on the 2003 invasion of Iraq (in varying font sizes that I can’t replicate here):

In ‘Life Is Too Easy’, she describes being insulated from the worst the world threatens:

You haul stuff in & you haul stuff out. You go to work. You come home. Then it’s Saturday again & you clean your house. There is no earthquake in your city & your parents or your children don’t disappear. You are not 14 & about to be married off to a cousin who will beat you. You are not a 2-year old girl carrying water. You have not been sad for 20 years. You do not think of setting fire to yourself. Life is too easy to say anything further about it here.

For all that the poetry world seems to invite divisions between ‘traditional’ and ‘innovative’ poetry, the subjects of this book are the subjects of all poetry / life, encompassing love, sex, politics, gender, the body, ageing, language, parenthood, biology, empathy and its brutal limits, war, money, nature, death. Lisa Jarnot writes:

‘Linguistically innovative’ simply seems to refer to the energy with which words are thrown at these walls, sometimes exploding, sometimes cohering, interplaying sense-as-sound and sound-as-sense. Francesca Lisette offers this cry:

Flash of silver eyes & hard engagement she rinses all
intensity with her own pearl blankness, engorged
with flowers & riding over the dashed day with hooks
for frowns with sallow weeds for trophies with poverty
for aces with battered words for armour, she is bound
to charge across each of our faces at the battle-lines,
unrecognized in flame

There is great intensity in this book. Innovative poetry can develop its own share of clichés (words like ‘erasure’; jargon; poems-only-about-writing-poems) and, in rapidly condensing 350-odd pages for review, I find myself leaping at brightly-lit moments, sometimes tiring of that knottiness which requires slower work, the consciousness of language as a material as well as a medium. However, this anthology is mostly blissfully free of cliché, often performative, filled with a lyrically unpredictable prism-ing of language that’s determined to push beyond telling the reader what they already know they know. It contains such reams of adventurous poetry that it’s bewildering in its overflow.

Julia Spahr makes a poem from dazzling lists of creatures, writing “this is […] where we learned depth” (this is only a tiny excerpt):

the river redhorse, the locust, the ebonyshelf, the giant water
bug, the maple, the eastern phoebe, the white sucker, the creek
heelsplitter, the mulberry, the crane fly larva, the mountain
madtom, the oak, the bank swallow, the wabash pigtoe, the
damselfly larva, the pine, the stonecat, the kidneyshell,
the plum, the midge larva, the eastern sand darter, the rose,
the purple wartyback, the narrow-winged damselfly, the
spruce, the pirate perch, the threehorn wartyback, the sumac,
the black fly larva, the redside dace, the tree-of-heaven, the
orange-foot pimpleback, the dragonfly larva, the walnut,
the gold fish, the butterfly, the striped fly larva, the willow,
the freshwater drum, the ohio pigtoe, the warmouth, the
mayfly nymph, the clubshell.
And this was just the beginning of the list.

Emily Critchley’s introduction apologises that she can only offer a ‘snapshot’ of innovative work being made; there is a wider spectrum, as always, beyond any selection. This review can only give an even-smaller snapshot. If you love colour, vitality, and invention, do read this: it is an exciting collection, full of the kinds of wild experiment that often fly under the radar of mainstream awareness. This is some of the most vibrant contemporary work, and deserves to be read widely and generously. Despite being a fairly vast compilation, it also costs about the same as any other collection. Here is a full list of the poets included: