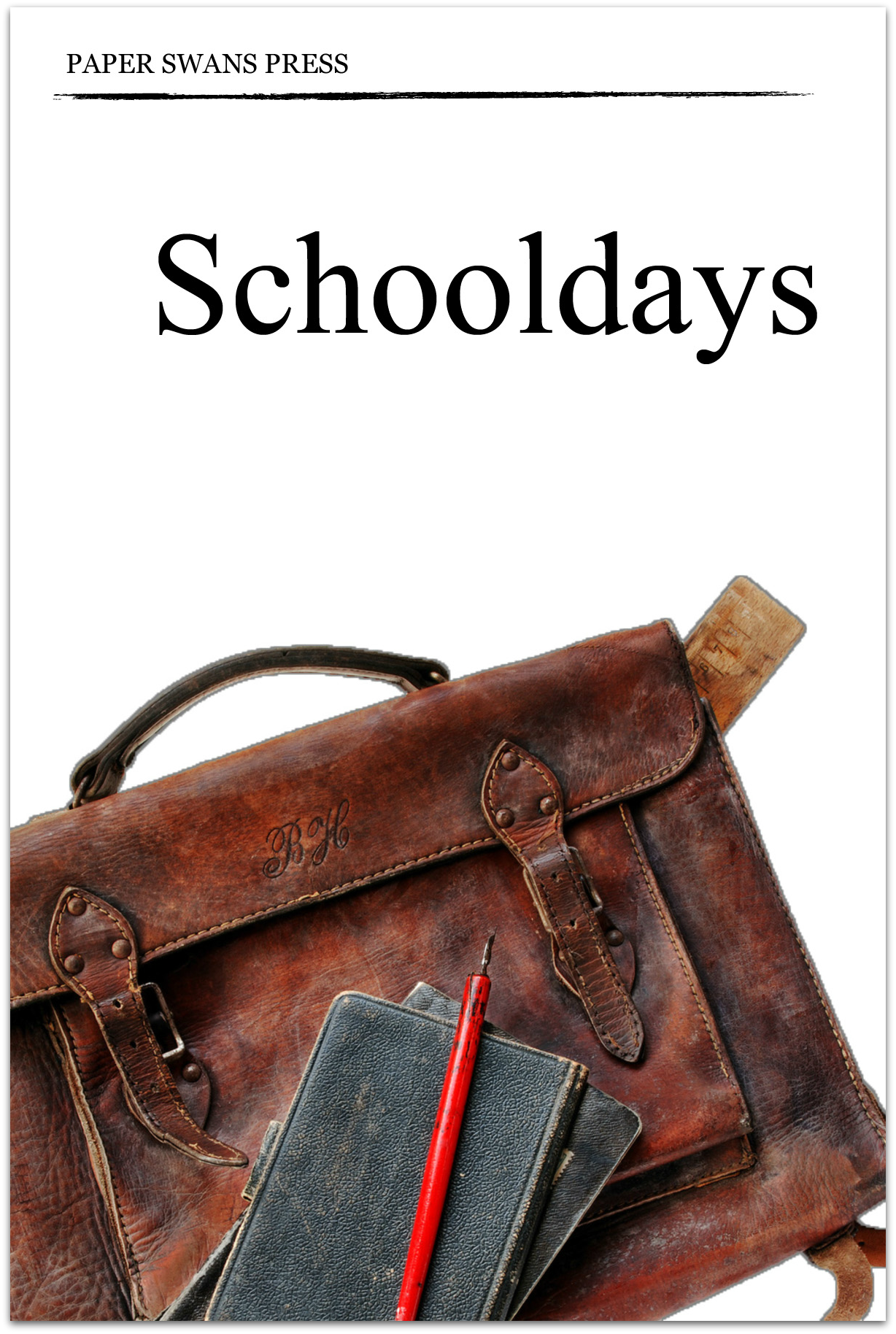 In her Introduction to the anthology Schooldays, Sarah Miles comments that our experiences in school shape us in many ways. The old clichés describing school as The Best Days of Our Lives, however, are not necessarily accurate, and the poems contained in this collection illustrate this fact in vivid fashion. It is usually the case in literary anthologies that the quality of entries is uneven. Not so here. This intelligently edited, thematically diverse anthology has been painstakingly curated.

When banks and other instiutions set up arrangements for internet security, one of the questions asked is the name of our first teacher. Nina Lewis, in ‘Ambiguous Answers’, describes a teacher who has asked a child what the opposite of ‘sweet’ is, and is perplexed by her answer, ‘Chocolate.”

You asked me why I thought it was chocolate
and I explained how, with weekly pocket money,
Dad would take us up to the post office and
We could either afford sweets
or chocolate,
but not both.

The ending is skillful and sharp:

I didn’t really know what ‘sour’ was
but the look you gave
demonstrated it perfectly.

Elizabeth Sennitt Clough, in an allusive and evocative poem titled ‘Mother’s Day Portrait,’ describes a child who paints her mother in grey tones, feeding chickens, depicting the family’s ‘tribal shame’ at the mother’s being forced to stack shelves in a supermarket rather than being a conventional stay- at-home farmer’s wife. It concludes:

The teacher said,
well done and named it Farmer’s Wife.

Teachers can be evil. Tony Cavender begins the ironically titled ‘Happiest Days’ with images of the physical reality of schools (‘the screech of chalk on slate,’ ‘The etched initials on the desks’), then shades to something far darker:

The vinous reek of ink;
The board rubber hurled in rage,
The ruler rapped across the knuckles;
He smiles—
Teaching was so much more satisfying then.

In Carole Bromley’s deft and powerful ‘On the Carpet’, we encounter the vulnerability of a child who has been called into the headmaster’s office to be accused of shoplifting. The incident is presented through the child’s eyes:

The carpet is threadbare and brown
and my feet, in their red Startrite sandals,
suddenly small. There is an earwig
marching across the pattern. It must seem
like a hundred miles to him.

When the Headmaster, with loud voice and ‘coffee breath’, asks the child if she has stolen something from Woolworth’s, Bromley evokes her terror and mute defiance:

But I can see the counter at the big shop
the spinning top, the clockwork mouse,
the striped plastic windmill and, in my head,
my hand is reaching. I’m crying now,
I’m stammering but I keep on saying
I didn’t do it though now
I’m not sure any more. Perhaps I did.

Perhaps it was me. Perhaps I’m a thief
but I won’t say yes and I won’t look up
at Mr. Applebeck who is a giant.

Despite it all, children are remarkably tough and resilient. Gill McEvoy, in ‘The Snow Gift’, tells of a child who is late to school because she has stopped to hack free a bird trapped in the ice of a pond, a ‘stiff magnolia of swan.’ The poem ends:

I watched in silence as my name
was entered in the unforgiving book.

Back home a glittering gift of snow
thawed gently in a box of straw.

The schoolground can be a site of physical as well as emotional violence. Sonya Oldwin’s flash-fiction entry, titled ‘Served Cold,’ describes a child who is being bullied. She takes refuge in a hedge, but this is not your usual hedge:

The hedge growled, shaking its twigs. If it meant to scare me, it
needed lessons from the twins.
I took out my lunch. The hedge snached the sarnie. It spat the
bread out a second later. But it devoured the ham. I stuck out my finger to
tease it, pulled back before it could take a bite out.

The final line savours the anticipation of delayed revenge:

In Sean Smith’s ‘The Happiest Days of Your Life,’ violence is raw and real. The imagery is corporeal and hits the reader with the impact of a physical blow:

A swift fist to the head and onto the tarmac
knees skimmed raw, black flakes
embedded in the cuts.
A grey-uniformed misshapen sack
of shaking lims and snot trails on
cracked skin. Curled tight,
a comma,
but nothing could pause this sentence.

But there are happier moments as well . At school we find friendship, first love, stirrings of sexuality. In ‘School Bus’, Lydia Popwich descrbes three schoolgirls, Sheila, Eileen and Gail, waiting at the bus stop:

Icicles like witch nipples
Point from on high.
waiting, I chew a black
Gob Stopper.

In another poem, ‘Autograph Book,’ she evokes first crushes, graffiti and marginalia :

Where are U
Gerald Duvall
2 cute 2 be
4 gotten.

Becky Spence, in ‘Behind the Disco’, renders the familiar suddenly strange:

Slipping out of the main hall, we’d explore the school in unfamiliar
darkness. The classrooms seemed different, a shadow of their
usual self. Corridors stretched forever, and steps echoed louder
than they had before.

Natalie Shaw’s brilliantly crafted ‘Like We Went to the Cinema That Time’ makes us relive the agonies of self-consciousness that we’ve all felt when we really like someone but don’t want to reveal our own vulnerability. A couple goes to the park:

We lie side by side. The grass is so green
we shudder, it’s hot, and still we don’t touch.

It’s burning. We stare at the sky through a tree,
and it’s so blue it hurts, just like the gap

Between us which crackles and spits, we feel each
spark of grass wake up and prickle

Here the perfectly judged line breaks and couplet structure, along with the repetition of the phrase ‘we don’t touch’, reinforce the vivid visual and tactile imagery evoking the joy and agony of adolescent longing.

The editors at Paper Swans, A. B. Cooper, Ellie Danak and Sarah Miles, are to be congratulated on assembling a graphically pleasing and accessibly priced anthology of rare literary quality, on a theme that will reach out to readers from the most diverse backgrounds.

2 thoughts on “Schooldays ed. by A . B. Cooper, Ellie Danak & Sarah Miles”