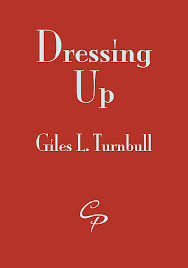 This is a fresh and readable debut pamphlet. Turnbull offers us pencil-sketches in words, of characters and situations in everyday life, with a soupçon of humour to flavour the mix. He’s good at adopting a persona, even when it’s female, in a leap of the imagination, he gives us an uncertain young girl:

like being back at school pupating –
was my denim too faded?
was it not distressed enough?

(Breakfast is the Most Important Meal of the Day)

The imagery is lightly done, and sympathetic to this character. Turnbull’s choice of mostly avoiding punctuation suits the short lines and the feeling of space in these poems, which are uncluttered and open to reader responses.

‘Glad Rags’ is something I can identify with. The speaker is in an expensive shop, enquiring about cashmere socks and commenting on designer goods, until the reveal at the end crashes the illusion: ‘Pay? / I was hoping to borrow these/ on my library card;’ This poem pokes fun at consumerism and uses exaggerated examples in a really witty way. He mimics the gushing speech of the intended customers by using overblown lexis like ‘darling’, ‘to die for’ and ‘fantastic with a capital F’. Rather than be intimidated by the shop assistant, the speaker admits in the final stanza, that sheltering from the rain is his real reason for browsing in the shop.

Most of these poems are free verse, but Turnbull is skilful at using subtle rhymes too. ‘Little Faces We Still See’ is a poem about lost and missing objects. The last line of each short stanza rhymes in a full masculine rhyme, but the end words are far enough apart to provide an echo of recognition to the ear, making the poem cohesive despite the slight departure of the last stanza:

those that were not home
when the house burned down
trying to pass on the stories
to those who do not know.

This ending brings together the lost objects of the first three stanzas, and suggests they are significant to their owners and have a story to tell, not just random things the poet has noticed.

As Turnbull develops in his writing, he will become more confident, and will not need to explain his poems as he does with a bracketed subtitle to ‘Somebody Said I Looked Hot’, which states ‘(but of course, it is summer’), when summer is revealed in the poem anyway: ‘July bleaching into August’.

Turnbull references Greek myths like Pandora (‘Four Walls’) and mediaeval knights (‘Dressing Down’) but places them in a modern context. ‘All the Worlds are Stages’ is a play on Shakespeare’s ‘Seven Ages of Man’ speech from As You Like It. However, Turnbull’s poem has fun with the idea of all the different possibilities our lives can have, and the different worlds that co-exist:

Beyond that lie a thousand conceivable worlds
in every one a different beginning
and half have happy endings.

The ending of the poem explores how each choice we make cuts down our options, and chances of gaining that happy ending:

In seizing one opportunity we know
one thousand doors,
one thousand other realities quietly close,
and at Fate’s every touch we fall,
like two mortal heroes.

Again, a pleasurable half rhyme ‘close/heroes’ gives the ending authority. I like the way this poem retains the idea of theatre, in keeping with the inspiration behind it. These poems are urban in their detail, full of affection for flawed humans and the small messes we make of our lives.