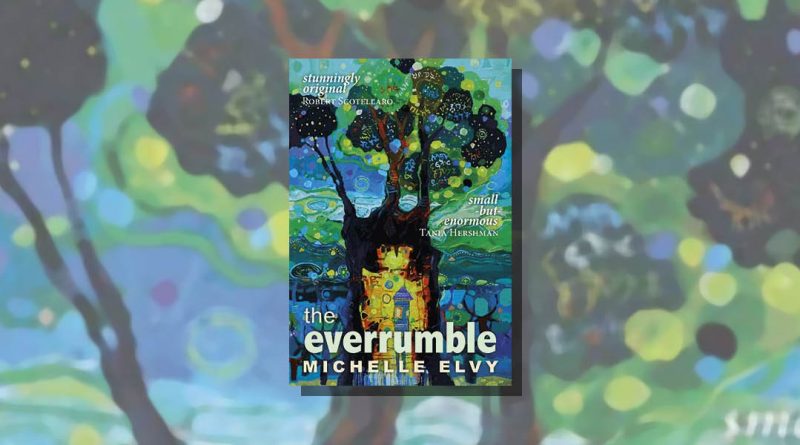 Zettie, at the age of seven, stops speaking. Her mother tries to find out why, but for Zettie the answer is simply ‘because’. In one of the fragments which make up this luminous book, the narrator encapsulates Zettie’s view of the world:

“The air after Because became a soft cushiony comfort: a knowing in the not knowing. A soft billowing thing that filled the space with expectation and – not dread, no – hope.

Why do we have to know the why? The because is infinite.” 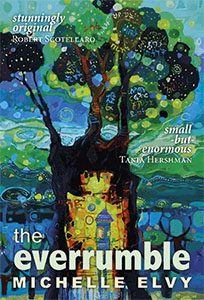 If this appears elliptical, the substance of the everrumble (Ad Hoc Fiction) is far from being so. The book is a poetic exploration of a world experienced through the senses, and especially the practice of listening to everything around us. Zettie starts sleeping on the pine floorboards of her house, through which she can hear the rumble of the earth. She becomes attuned to natural sounds to a fantastic degree; by the age of twelve, we read in the fragment ‘Fidelity’, she has the power to hear the wingbeat of a mosquito three streets away, concentrating on this in order to block the closer (human) noises she would rather not hear.

I refer to the sections of New Zealand-based writer Michelle Elvy’s book as fragments rather than flashes – for all that she is a writer steeped in the writing of flash fiction – because she describes the book as ‘a small novel in small forms’ rather than a novella-in-flash.

I think the difference is worth pointing out because the novella-in-flash is a developing genre of writing, and to me the everrumble has the qualities of a mosaic – take any one small piece on its own and it will tell you something, but only viewed as a whole do you really see what the light is reflecting.

“And now her cry would dwell in that layer of remembered sound, something real and everlasting to those who listen.

The glass of milk slipped from the small girl’s fingers. The sky crushed in on itself and let forth a shatter of rain.”

By the age of thirteen, we learn in the fragment ‘Specialists’, Zettie is skilled at differentiating the ‘alive’ noises of nature, ‘bears gawomping’ to ‘surf on a beach a thousand miles away’, from dead noises such as airplanes and police sirens which ‘make her tired, numb’. We also learn of some of her dreams of the wonders of nature and of the characters from books that she loves who are to be her lifelong philosopher companions, including Astrid Lindgren’s Pippi Longstocking — who can do anything — and the adventurer Huckleberry Finn.

The first half of the book is lively; the second half more reflective and sombre, an overview of Zettie’s adult life, in which meets a man with whom she can communicate without speaking. They have children together but Zettie remains a free spirit, travelling the world alone for many years. She becomes known as a soothsayer – ‘not because she could see the future but because she knew how to listen to all the sounds of the earth.’

Poignantly, her daughters have never heard their mother’s voice – and if she regrets anything about choosing not to speak it is that she hasn’t been able to read aloud to her children – but she speaks to them nonetheless through the language of her body…

“They have come to understand that she feels the smallest of vibrations beyond what they sense”, in dandelions’ flight and the wavelets on a puddle, for example.

Amongst the books which are important to Zettie, Michael Ende’s Momo, a fable about time and listening, is perhaps the one which carries most powerfully the weight of the everrumble. But for me the most affecting fragment in the book is the one entitled ‘A silence like no other’, in which we learn of the effect on Zettie of her first encounter with an elephant in the wild, when she experiences ‘the vast heartache of their history, their echo of memory upon memory. As if it’s her very own.’

In the end we are led to understand the power of the everrumble of the world, a wave which transcends space and time, beyond words. And yet Elvy conveys this through words, an extraordinary achievement. This is a book to keep and to cherish, a book to dip into again and again, to remind us of the transcendency of the natural world. And, in spite of everything, to give us hope.

Find out more about the everrumble on the Ad Hoc Fiction website.