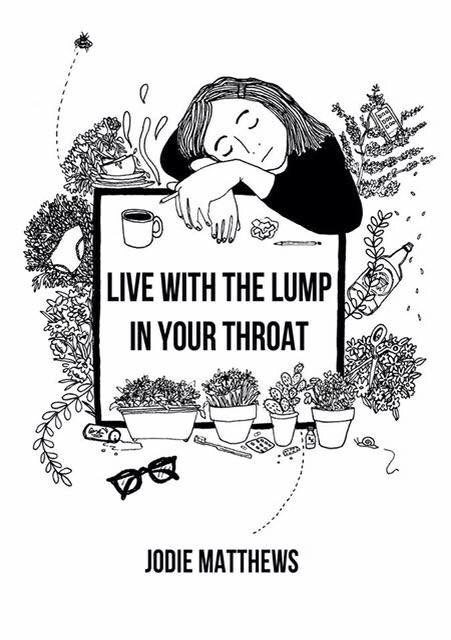 ‘Whatever you’re meant to do, do it now,’ said Doris Lessing, ‘The conditions are always impossible.’ Jodie Matthews is a poet just out of her teens who has done just that, in Live With The Lump In Your Throat. Her appeal is immediacy. There’s a freshness to this chapbook, which reflects both naivety and spontaneity: ‘drank a whole bottle of mixer / before we knew what ‘sans alcohol’ meant’ (‘2008’) She is paying attention to every little detail of her days because it’s all material: ‘my jacket doesn’t fit, bites into my armpits’; ‘your mum opens the door, I always forget her name, but she uses mine with forced familiarity’ (‘The story of more than one misinformed boyfriend’). These details bring a smile of recognition. Perhaps what is compelling is Jodie Matthews’ bravado, her mock-irony: ‘I hung myself with my H&M scarf and I still didn’t summon Katy Perry’ (Untitled). In these relationship poems,  the gender of the loved one slides from male to female: ‘You left a pube in my bed, / underwear stained red’ (‘My Throat is a Splinter’).  Or perhaps there are several ‘yous’, including the poet herself: ‘your eyes clump together with mascara in the mornings, temporary blindness is a good wake up call.’ (19’)

These are very tactile poems. All the senses are in play. First the “physical senses” — primarily sight, but touch too ; ‘sucked vodka from your stomach’ (‘Burnt Bread’); ‘I want to listen to every knuckle cracking skin like morse code’ (‘Part 1’). But also senses of all sorts, physical and metaphysical: ‘only 19 and your earth is still flat, no matter how hard you blow it won’t go round’ (19).

In ‘The science of seconds’ she writes;

science is an empirical doubter
so it’s more like 4 minutes
or maybe even 40 seconds
40 seconds to remind me why
I learnt to love through my hands in the first place.

The poems appear to arrive swiftly, like an instagram of words, capturing small domestic moments in a relationship. Her modus operandi is generally the list poem, as is commonly seen in performance poems and song lyrics. Here’s an amusingly wry example, where she also entertains the old paradox of ‘seeing’ and ‘being seen’:

Walk to the supermarket.
Consider whether you should’ve come later on in the day so you look
more like a busy person.
Put salad in your basket and walk around the store.
Dump it in the biscuit aisle.
Wonder whether people are watching you.
Decide they aren’t.
Decide to watch them instead.
Become paranoid that they actually are watching you.

The poem moves from the mundanity of banana milkshakes, tobacco and change to realising ‘you won’t be reincarnated’. Her list poem could be seen as a priamel, in which one pays attention to the order of the items, because the last item provides the climax. Order and sequence matter.  But although there’s a turn at the end, her conversational tone is tongue-in-cheek ironic: ‘Fall into existential crisis just in time for the weekend.’

These poems ‘talk’ – which Matthews does well, because the word conveys something of the seemingly casual, spontaneous, diary-like conversations with the self, or natural conversation where details are just as likely to veer off into digressions and seeming incongruities.

The voice of the bemused poet seems also to respect her own otherness, her susceptibility to wonder: ‘We used to burst dandelion seeds with the clap of our hands’ (2008’). In the prose poem, ‘19’:  ‘Your bed is a castle, a ship, and estate. You’ve got monsters in the form of forgotten, frogs in throats, mouldy mugs and formal looking envelopes. They won’t ever love you like you wanted them to, an over eager boy chews on your lip like a Jack Russell who hasn’t had his balls chopped off.’

The images evoked are a funny mix, which surprisingly results in a kind of sadness.

The title alone gives an indication of both courage and sensitivity. And there’s poignancy too in these lovely lines:

I don’t shower daily
instead I let the sun soak me.
There’s been a few hands
I wanted to scrape off me
the rest, I let sink
in a history of touches layer me thin

The publisher, I Came Here Looking For a Fight, claims that this is ‘the most incredible collection we’ve had’. It’s great that they’ve taken a chance on this young poet, but she has a way to go in terms of structure, technique and rhythm before such praise is acknowledged as un-exaggerated. Nevertheless, this is a voice I trust. The ambience, subject matter and quirky imagery suggests a potential contemporary Rosemary Tonks. These poems touch with their charm, honesty and vulnerability, and no doubt, for certain readers, they will resonate.