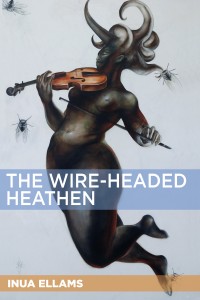 Inua Ellams is a playwright as well as a poet. Writing is writing, you’ll say, but to excel in different modes you have to know how to handle different audiences, how to suit each vessel your words are poured into. This is something Ellams is proficient at, but I must admit that I enjoyed detecting playful signs of his other writing life in his poetry: The Wire-Headed Heathen to me is as slickly staged as any sharply-observed piece of theatre.

In ‘National Anthem’, the phrase ‘The mango seed / will still grow when you return’ is prised open by a parenthetical aside running for 24 lines, which isn’t without reminding me of a theatrical aside. The only difference is that a theatrical aside tends to block out other (or some) characters on stage, whereas both sets of writing here want to be almost doubly heard, in two different gears. The aside situates the seed, zooming out of its place behind the grand piano, into the cityscape and then coming back in to:

the right corner
where the keyboard tinkles out
our national anthem

The non-aside is a restrained reassurance, when not if you return, but the aside allows itself more room to manoeuvre. I found the lines ‘small apartments tight / as veins you want to pry open’ particularly moving, full of longing and frustration.

Characters are drawn with brilliant cacophony throughout the pamphlet. I particularly enjoyed the comedy of chaos that is ‘Faith in a Time of Double-dip recessions’:

Down the road he accelerates.
Got to get this bastard off my backseat,
he thinks, narrowly missing Mrs Smith
who startles her latte across her blouse,
spews the foulest words. A schoolgirl
passing taps her teacher with That’s it!
Daddy used those words!

However, it’s a skill that’s wielded with a purpose, most poems have a political edge to them, ‘Faith in a Time of Double-dip recessions’ being no exception. In ‘Swallow Twice’, a childhood memory brings up the sober reflection:

how frightening it is to have nephews growing up,
who want to be like us, like men.

Elsewhere, in ‘Short Shorted / Odogbolu 1995’, a poem divided into three sections, ‘All this is fact’, ‘All this is possible’, ‘All this is fiction’, you question which horror is true or false when a schoolboy is electrocuted ‘like a bird on fire’. There are so many poems here that warrant reading and re-reading. Ellams is a master-storyteller, whose extensive travelling has shaped a pamphlet that is at once expansive and intimate.

The pamphlet is part of a series presenting eight new-generation African poets (edited by Kwame Dawes and Chris Abani), if they’re all of this quality, you’d do well to purchase the set.