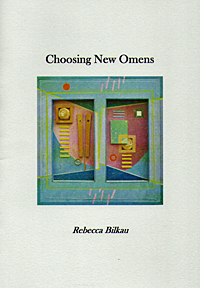 Choosing New Omens is a pamphlet of fifteen poems charting the poet’s journey from England into a new life in Germany. It nails its colours firmly to the mast with the gripping opening poem, ‘On Not Going to Bergen-Belsen’ which admirably demonstrates the difficulties which lie ahead.

And all I can see
is a crumbling ridge of hips, not in the car,
not on the road, but in all my pictures of this land
till I married into it.

These are vivid and precise poems. In ‘My Continent of Rain’, the poet examines the idea of home:

…This garden could be England
Eden or any iffie orchard
but it’s Wolfbuttel, and I planted it

in a fever of anxiety and hope. The plants
clash, haphazard as history and it’s clear
every border is every place I’ve ever thrown

a seed: London, Belfast and the very best
from my beloved north west, every place
turning hallowed now they are floating memories.

The beloved north west of England re-appears in a later poem, ‘At Sea’:

…The Irish Sea
keens into the Morecambe Bay I smuggled
into my husband’s country, and it re-stings eyes

dried open by their salt longing for home.

So how do you make a new country feel like home? These poems suggest that you do this by inhabiting its histories and stories, like Mathilda in ‘The continuing Testimony of Mathilda of England and Brunswick’ and the two women who ‘finger-sift the shore, knuckles white / in the sand of their summer skin’, who are looking for Hag stones in ‘Stone, Usedom’. Another theme emerges in this pamphlet, of boundaries and certainties dissolving. For example, in the poem in the middle of the sequence ‘Cranes’ about the appearance and disappearance of these birds:

We believed the news, but it snapped our faith.
Two weeks before, the polyglot horde
babbled over us; in the cranes’ wake
we relaxed our ears, buckled to exaltation,
throwaway mutual blessings and warmth.

By the time you finish the sequence, you feel as if you too have been on a journey; it ends, appropriately, with ‘Listening to a Sami Story Teller, 1 January 2014’:

Autobahned out of context, our in-car
universe is darkness, flashes of lives
in passing trucks, left-over Christmas lights

from distant towns, and the radio, Festival
jaded, we’re glad to track down a story teller
who crunches through the speakers with frost holes

in her prose. Sami…. 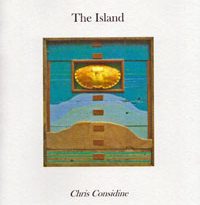 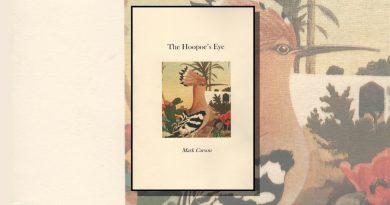