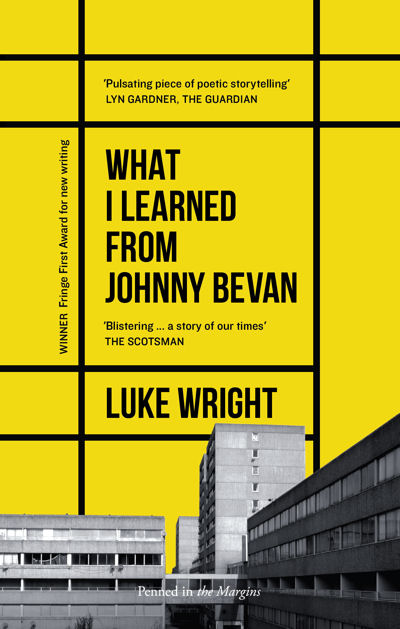 I’m not a lover of Pope or Clive James’ rhyming couplets, however clever they are, and I’m not a great fan of Byron or Dryden’s longer work; so I came to What I Learned from Johnny Bevan a mite prejudiced. I saw the stage show in Brighton last September, and was impressed by the feat of memory. At 54 pages and around 20 lines per page, that’s more than a 1000-line plus feat, a polished, personable performance, a story told in verse. Now there’s a smart edition in print from Penned in the Margins, the text tinkered and tightened since the award-winning Edinburgh shows. On the page Luke Wright’s talent is plain to see: his work switches with some facility between characters and voices, as well as between chunks of rhyming couplets, blank verse and ballad. The first lines have a confident punch:

To London then, that fatted beast
on which the whole world comes to feast,
all private woe and public farce;
where money twerks its oiled arse…

But within ten lines of this opening and throughout the remainder, I found myself asking, is there anything new here? Or is this stuff safely pandering to stereotypes and conventions, full of stock characters and lines I felt I had heard a dozen times before? This is bland verse. Oh youth, where is your experiment and innovation?

All poetry is performative. But this is performing poetry; this is Luke Wright performing a version of Luke Wright. There’s a kind of ‘rant envy’ going on here, as if the only authenticity worth having is sub-demotic. Perhaps it’s the poet Luke Wright wants to be, but I think he’s probably much better than this. It’s not really poetry, it’s light lyric verse, and Victoria Wood and Pam Ayres do a much better job of it. It’s certainly not ‘epic’.

There’s a tendency for young performers of spoken words to indulge in personal puffery: no one is going to convince me Kate Tempest is the new Shelley, nor Luke Wright the new Pope. To describe 1000 lines of easy going, unchallenging verse as epic is pushing it a bit. I read it in one sitting on the loo. Paradise Lost is 10,000 lines. That’s epic.

Now, don’t take this the wrong way. I’m writing this to cut across the mutual back-slapping of Latitude-lovers who seem to think poetry is some kind of hand cream. I write this to let some blood out of the body of the real Luke Wright, poet. I write this as a challenge to his talent to write the poetry he could and should be writing, not the anodyne, anachronistic assemblage presented here.