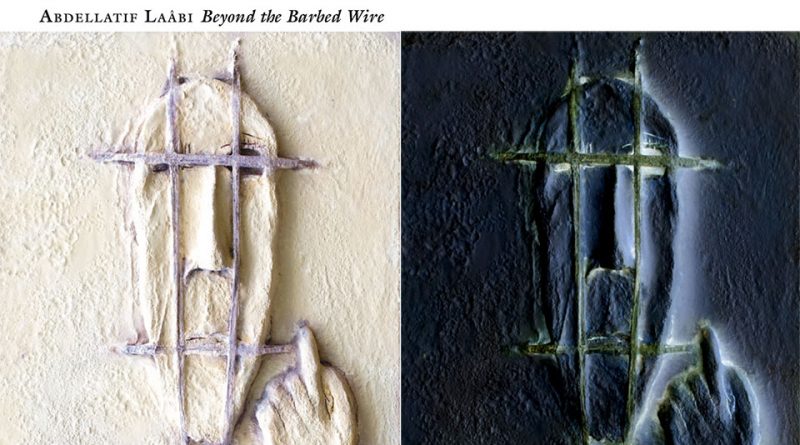 André Naffis-Sahely’s translation of the Moroccan poet Abdellatif Laâbi’s selected poems, Beyond the Barbed Wire, is a welcome addition to world literature. Recipient of many literary awards, including the prestigious Goncourt Prize for poetry (2009), Laâbi has written seventeen books of poetry, two dramas, two children’s books, and twelve non-fiction books. Laâbi is also credited for his French translations of leading Arabic poets such as Mahmoud Darwish, Abdul Wahab al-Bayati, Mohammed Al-Maghout. Thus far, nine of Laâbi’s books have been translated from French into English: André Naffis-Sahely deserves highest credit for translating four of them, and re-igniting interest among English readers.

Naffis-Sahely’s present translation consists of thirty-three poems from five books that span from 1976 to 2013. The collection also contains two essays: one on writing, and a second on the death of Moroccan King Hassan II, long time tormentor and “muse” of Laâbi, who turned the poet’s life into “a bottomless hell”.

The collection provides poems that reflect Laâbi’s life and poetic style. Several poems speak about the poet’s experience as prisoner of conscience and his life as an exile. ‘Urgent Life’ evokes Laâbi’s direct and lucid style of diction:

The collection portrays the “orgasm of crime”, following themes of shattered dreams; the bond between a father behind barbed wire and his waiting family; the atrophied and docile body; and mechanisms of torture and fear. The poet, “translator of pain and humiliation”, graphically portrays physical torture and psychological torment in which victims are “skinned alive” to confess to crimes they never committed. The long, mostly unpunctuated poems are loud cries of abuses and read as hallucinatory notes. Ultimately, the form becomes the message: these poems embody bold defiance against injustice.

The poems written in prison or immediately after Laâbi’s release do not fall into conventional sound rhymes or meters: he expresses collective maltreatment through free verse, capturing the suffering that he describes as “inferno of solitude”. The poem ‘Letter to My Friends Overseas’ explains why he might deflect traditional poetic forms:

‘One Hand Isn’t Enough to Write’ expresses the poet’s engagement with the public and his concern for the sufferings of the wretched of the earth. It also discloses Laâbi’s deep connections with global literature:

Through continuous pain, the poet magnificently describes the extent to which the human body can endure torture. The only means of defiance becomes the cry the poet describes in his essay, ‘Chronicles from the Citadel of Exile’:

The cries when the cry becomes the Esperanto of resistance, the slow epic of hope and human drama. Oh, my dear comrades, my flesh is hallucinating, and my heart is so full of love that it can’t stand it anymore, your eyes, which are so unforgettably full of promises, our irrepressible tenderness.(63)

The atrophied body is another weapon the prisoner can use to disconcert his torturers. In ‘Hunger Strike’:

This long suffering is sustained through functionaries who are themselves victims of the system, rewarded with unaccountable power to abuse, which Laâbi rigorously portrays in its nakedness. In ‘The Policeman’s Speech’, he describes the hollow, banal mimicry of a police officer:

Though punctuated by poetic outrage, these poems are not vengeful: Laâbi understands that injustice brutalizes both victim and perpetuator. The translator renders the poet’s nuances and complexity aptly and beautifully: the book has received English PEN Award for Translation, and the poet Jim Moore, in his introduction to the selection, praises the importance of the translation thus:

This new selection of Abdellatif Laâbi’s work, […] takes the reader through the many twists and turns of Laâbi’s life, at times a life full of drama and despair, at other times a life seemingly lived at one remove. If Laâbi is a political poet – and he certainly is – he is also a poet of great solitude and loneliness. All of this, thanks to this generous and well-chosen selection of his work, is available to us now in English. (xx)