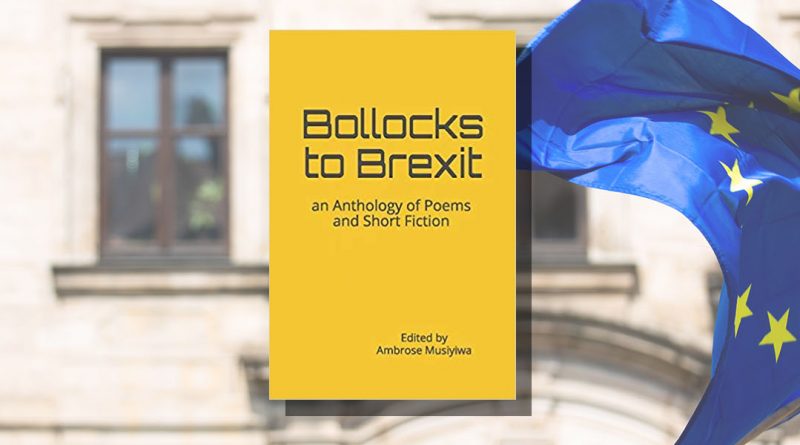 This is an anthology that wears its heart on its sleeve. Clad (perhaps not uncoincidentally) in Liberal Democrat yellow, it brings together an eclectic range of voices against Brexit, from established poets and spoken word performers to flash fiction writers and lyricists. As one might expect, the openness of this editorial policy means that a wide variety of styles is on display and the quality of the work varies considerably. However, the reader cannot help feeling that quality is not entirely the point here. The contributors are motivated by feelings of sorrow, anger, frustration and alienation, and the anthology itself seems intended to offer a kind of therapy both to the authors and the presumed audience.

A number of the contributors use familiar forms and intertextual references to create work that would undoubtedly be at its most effective when performed at a rally or march. For example, Anthony L. Church (who is not the only contributor to have fun with the famous red bus) reworks nursery rhyme to poke fun at the rhetoric of the Leave campaign:

David R Mellor’s ‘The Hokey Cokey (Brexit Mess-Up Mix)’ takes a comparable approach, refashioning a familiar piece of popular culture to satirical ends, although the poem might have been more effective if it had stuck more closely to the original formula:

You put David Davis in out
In Dominic Raab, out, in Stephen Barclay
You shake them all about
You do the Hokey Cokey and you turn this country upside down
That’s what it’s all about:

This is the kind of verse that the Germans (who really do have a word for most things) would call Gebrauchslyrik, in other words poetry that is made to serve an immediate purpose, but does not aspire to anything more than that. Any mass political movement is likely to produce plenty of it and anti-Brexit campaigners may well want to make use of these texts.

Another strain of writing in the anthology imagines life beyond Brexit in dystopian or even apocalyptic terms. For example, Molly Burns describes a ‘Post-Brexit Meal Plan’:

Let us live in a trench decorated
With children’s pasta portraits and
East the glue for breakfast.

In ‘Closing-down sale’, Colin Gardiner portrays the post-Brexit UK as a high street that has more than a touch of ‘The League of Gentlemen’ about it:

The butcher is hacking away
at chlorinated chicken breasts. Beware.
He’s a Leaver with a meat cleaver. He’s
got something to say. A thought for the day
he read in the Daily Mail. He’s hiding
the best cuts for the sweet-shop lady, who
bit the heads off all the jelly babies.

Chloë Jacquet’s poem ‘Brexit’, one of the funniest in an otherwise fairly pessimistic anthology, manages to image a future where things do not turn out quite so badly after all: the word ‘brexit’ has now just become a synonym for ‘bored or boring’ and children yawn their way through history lessons on the subject.

Several poems seek to mobilize extended metaphors to describe the current state of our politics, with the most common approach being to draw on the image of a ship or even a ship of fools. Our maritime and island heritage clearly still loom large in British literary culture. However, in this context I want to give special mention to Mark Rutter’s poem ‘March’. This particular month, unsurprisingly given the original projected date of Brexit, gets a lot of mention in the anthology, but Rutter’s approach is striking:

The equinox a building
institutional and secretive,
guarding the deliberations of spring,
infuriating in their slowness,
refusing to stamp the visas,
keeping the passports waiting
at the checkpoint of the year.

I quote only the first stanza of this unsettling poem here, but Rutter’s indirect approach to the material was a welcome relief from the more agitprop tactics of many of the other pieces. This uncanny association of the natural with oppressive bureaucratic structures suggests the poisoning of all life by our current obsession with immigration, but the metaphor is not exhausted by this political interpretation. I also sense an underlying concern with climate change, which is so closely linked with issues of migration, but the poem refuses to give us any easier answers, or to allow its ambiguities to be reduced to a single meaning.

As the examples discussed above suggest, there is little in this anthology that would necessarily persuade ardent Leavers, and the title of the book alone seems to exclude them from the conversation. This lack of openness to dialogue is potentially also a problem for those pre-disposed to share the sentiments expressed in these poems and short prose pieces. There is justifiable anger against the falsehoods peddled by Brexit propagandists: the ‘Dyspeptic / pages of the tabloids’ with their ‘apoplectic editorials’, as one poem by Michael Woods puts it; or simply the ‘fascist elite’ described in a lyric by Wayne MacDonald. However, the motivations of those who voted to leave the European Union remain shadowy throughout the majority of the contributions. Brexit and its fallout are characterized as the ‘consequences of wrong opinion’ (‘Brexit’ by Rob Lowe) or else the gullibility of those who have swallowed the lies of the Leave campaign (for example in ‘Thank God for British Values’ by Isabelle Kenyon).

Alexandra Dedman’s moving ‘My small part in this mess’ manages to strike a different note, however, exploring her own relationship to her leave-voting provincial home. Here the leave vote is not a symptom of ignorance and gullibility, but a reminder that ‘we are all one, these folks and me’ and that ‘the vote which came, although it sounds daft / Was only myself, reminding myself, about that’. Similarly affecting are poems by BME writers who express the confusion and sorrow caused by the further resurgence of racism in the wake of the 2016 referendum (for example, Ayodele’s ‘We don’t talk about Brexit anymore’ or Noornorth’s ‘Settled’). These are perspectives that are not heard enough in the ongoing Brexit debate and it is good to see them here.

Nevertheless, the anthology as a whole inevitably gives the impression of preaching to the converted. If you are one of those converted, you will find much comfort and affirmation in its pages, but it will not bring you closer to understanding the other side. While the figure of the Daily Mail-reading little Englander looms large in these pages, the undoubted complexity of the causes of the vote to leave the European Union are not really this anthology’s concern.