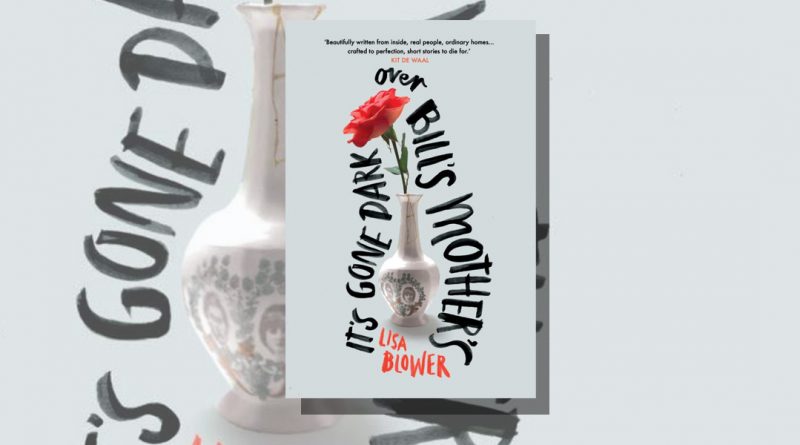 It’s Gone Dark Over Bill’s Mother’s (Myriad Editions, 2019) is a collection of twenty short stories by award-winning writer and author of Sitting Ducks (Fair Acre Press, 2016) and Pondweed (Myriad Editions, 2020), Lisa Blower. The title of the book is a local saying used when the skies above the Potteries appear overcast and full of rain. A phrase used by the working classes, the colloquial term also denotes something is brewing and this is reflected in what Blower writes of people caught in unsettled times.

I found the stories that include ‘Broken Crockery’, ‘Love, Alvin And Ramona’, ‘The Land Of Make Believe’ and ‘Dirty Laundry’ grabbed me with their Stoke-on-Trent locality, and sense of place. ‘Barmouth’ has it’s locality in Stoke-on-Trent as well as the familiar once yearly family holiday to the seaside. A beautifully funny, moving account of a family holiday and the impact of the relationship between a mother, daughter and grandmother. This story, as with many in the collection, is written in the first person which makes it a joy to read and ensures the impact of the ending is felt. Through a first-person perspective a reader can have a feeling of traveling with the protagonist, being in their world or situation from the first line of a story. In ‘Dirty Laundry,’ Blower has decided to write in the second person which gives the storytelling strength. With a ‘you’ narrative it provides the storyteller power to tell the story, free from being over sentimental or being overcome with emotion.

‘Dirty Laundry’ tells the story of Alma, forced into early retirement and, having lost money through poor company investment, she is made to face the realities of her life.

“YOU’VE BEEN READING about the cuts and Icelandic banks but you only put two and two together when you’re given your cards and see the state of your pension. You go and see Beattie—a steamroller of social action­­—who tells you to sit and stop shaking. You are fifty-eight, she reminds you, and not cheap. ‘Alma,’ she says, putting on bifocals to read your statement, ‘you’re lucky you even got that.’ A week passes. You’re awarded a spray of tropical stalks to thank you for your forty-three years of service in the Town Laundry. There is no porcelain figurine, though you’ve dusted the hearth ready, and not everyone’s found the time to sign your card.”

In this way, the reader is granted access to Alma’s past and present, revealing all that has impacted on her current emotional state and her building determination not to remain unseen. The second person unwraps the layers of Alma as she discovers what her life isn’t, and what it has now become, forever. “There are fifteen toilet rolls stashed to the side of the cabinet, four towels on the radiator, six bars of soap under the sink, and your wedding photograph, hung on the back of the bathroom door to remind Clive who you are.” Alma feels trapped and unfulfilled and taken for granted by her husband.

“The weeping overcomes you. You sit down on the toilet and wonder what you’re crying about. You realise it’s the towels: the way Clive crams them onto the radiator after his shower so they stay damp in the middle. You’ll see these things all the time now. You’ll know when he goes out and when he comes in, when it is he changes his underwear for you wash up to fifteen pairs each week.”

She sets up her own laundry business, to try to regain her self-worth and control. She knows her husband’s secrets and a daughter has a life she doesn’t understand but as she takes in other people’s dirty laundry, maybe there’s a way to change, so she’s no longer the unnoticed one.

Blower is wonderful at creating the different voices of her characters with her authentic dialogue and writing style. In ‘Broken Crockery’ the protagonist isn’t named or gender-specified and yet I know it is a child of ten or eleven and most likely a girl. ‘Broken Crockery’ is a story told with humour from the innocence of a child’s viewpoint at the beginning of the story and then that innocence is replaced by a knowing. Throughout the story I gained a sense of family and the nan is the head of this family.

It’s a story of pride, of Stoke-on-Trent, what Margaret Thatcher did to the working class and how in 2009 it’s not been forgotten, because there are people like Nan and her granddaughter. The girl’s mum tells her that her nan’s in hospital with Margaret Thatcher and, like her, she’s got a broken arm.

“Mum says my nan’s in hospital with Margaret Thatcher. She said she’d tripped over the hearthrug and broke her arm by smashing it on the fireplace. I’ve never liked that fireplace. I don’t like that china sausage dog that stares at me like I’m teasing it with something tasty in my pocket. When my nan’s not looking I hide it in the bin. Nan says that sausage dog is the last of the Potteries. It deserves to be on show to make everyone remember what this place was. Mum says that when Nan fell, she broke the sausage dog’s legs. Mum says bones get brittle. Sometimes, she says, they don’t even mend. I asked if my nan’s bones would mend. Mum said Margaret Thatcher could pay for new ones.”

It’s about a nan passing on a way of life and a mother struggling to keep it together.  They’re not a touchy-feely family: “Mum told me to give her a right big hug before she went to the hospital. ‘What for?’ I said. She said she needed it. I said I wanted to go too. She said I couldn’t because the buses were scary in the dark.” As the girl is left alone at home while her mum goes to the hospital with the card the girl has made, the girl remembers what her nan has taught her and thinks about being a vet when she’s big. Then her mum returns but is lost and the girl recalls all her nan has ever told her, and steps up to take control.

The joy of this collection is its sense of place and people. The stories let the working classes speak, let those who have come to Stoke-on-Trent from far away, like in ‘Abdul,’ tell their stories.

We see life through his eyes, or those who are brought up on the outskirts of the community, and we see them struggle to find out why, as in the story ‘The Land Of Make Believe’, they are given a chance to discover their place or journey. I enjoyed reading this collection because of its working-class roots and Blower’s accessible style of writing.

Find out more about It’s Gone Dark Over Bill’s Mother’s on the Myriad Editions website.

Lisa Blower’s It’s Gone Dark Over Bill’s Mother’s was longlisted for the Edge Hill Short Story Prize 2020. Sabotage Reviews is covering a number of the indie-published titles nominated for the prestigious award, including This Paradise by Ruby Cowling,  This Taste for Silence by Amanda O’Callaghan, To the Volcano by Elleke Boehmer, This Way to Departures by Linda Mannheim, and Paris Syndrome by Lucy Sweeney Byrne. The shortlist was announced in September and the winner will be announced on Monday 7 December 2020.